For other uses, see Dissension (disambiguation).

Dissension is the thirty-eighth Magic: The Gathering expansion, and was released in May 2006 as the third and final set of the Ravnica block.

Dissension contains 180 black-bordered cards (60 rare, 60 uncommon, and 60 commons) — 15 more than normal for a small set to make room for a reappearance of the popular split card mechanic from Invasion and Apocalypse.[2] The prerelease events for this set were held on April 22–23, 2006.[3][4] Its expansion symbol is meant to be a variation on the wrought-ironwork shown in the Guildpact symbol, but broken to reflect the disintegration of the Guildpact spell. Like the Guildpact symbol, it has three “branches” to evoke its three guilds.[5] Dissension expanded on the Ravnica block themes of multicolor and hybrid, adding the last three new guilds to the environment (The Azorius Senate (white/blue), the Cult of Rakdos (black/red) and the Simic Combine (green/blue).[6][7]

Dissension was sold in 15-card boosters, three preconstructed theme decks and a fat pack.[8] The decks and the fat pack contained a Pro Tour Player Cards. The booster packs featured artwork from Isperia the Inscrutable, Lyzolda, the Blood Witch, and Cytoplast Root-Kin. The prerelease card was the foil alternate art Avatar of Discord.[9] The release card was Azorius Guildmage.[10] The set was accompanied by the novel of the same name by Cory Herndon. The Magic Online release featured four new pieces of art commissioned for the tokens.[11]

The streets of Ravnica run red with blood. Guild fights guild and horrifying monsters ravage the city, destroying all who stand in their way. But as Ravnica crumbles, a method emerges from the madness, and it becomes clear that the city's chaos was calculated.[12] Something must be done. And unfortunately for Kos, being dead doesn't mean you don't have a job to do. The Guildpact's spell is finally broken when he publicly arrests Szadek, exposing him and House Dimir to the public. 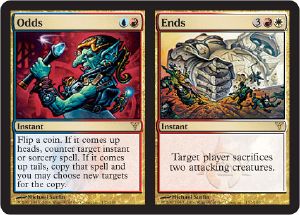 Dissension continued the guild model and introduced the final three two-color guilds, two with a new keyword and one with an ability word. The guilds and associated mechanics are as follows:

order, but they were originally displayed in a different order by Wizard: Azorius Senate, Simic Combine, Cult of Rakdos.

The following creature types are introduced in this expansion: Construct.

For cycles that are part of the guild mega cycles, see Ravnica block#Mega cycles.

The following cards have been reprinted from previous sets.

In Dissension there were three guilds so there are just three theme decks instead of the standard four. The preconstructed theme decks are: