Worldwake contains 145 black-bordered cards (10 mythic rares, 35 rares, 40 uncommons, and 60 commons), including randomly inserted premium versions of all cards in the set. The set, like its predecessor Zendikar, is centered around lands.[4] Thematically it emphasizes Manlands and cards that turn lands into creatures.[5] The expansion symbol for the set is an hedron, opening up.

Ancient forces begin to awaken, causing the world of Zendikar to wreak havoc upon its inhabitants. This exotic and dangerous world is made even more perilous and yet more attractive to adventurers and Planeswalkers wishing to plunder its treasures.[6] 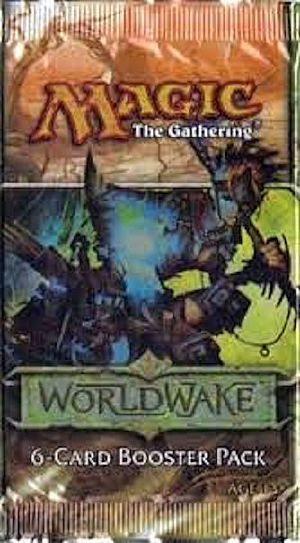 The promotional cards given to participants at the Prerelease tournaments, Comet Storm, and the Release event, Joraga Warcaller, both highlight the new mechanic for the set, multikicker.[10] The promotional card at the Game Day event was a full-art Hada Freeblade, while a full-art Kalastria Highborn was given to the top-8 participants.[11] The Buy-a-Box card was Celestial Colonnade.

Regular boosters of Worldwake come with a bonus sixteenth card that is either a "tips & tricks card" or a creature token from Worldwake. One face of the Worldwake bonus card has one of five different rules tips or is one of six different creature tokens. The other face has one of 13 advertisements for organized play programs, Rise of the Eldrazi, Duels of the Planeswalkers for Xbox Live, Magic Online, fat packs, A Planeswalker's Guide to Alara and Ultra Pro products for Magic.

For the introduction of the new Jace, the Mind Sculptor, Wizards of the Coast organised a worldwide treasure hunt: the Worldwake Planeswalker Chase.[12][13]

The Worldwake tokens in numerical order are:[14]

"When Lands Attack" was a major theme of Worldwake. The set has a cycle of dual manlands: Lands that can produce one mana of either of two allied colors and can be activated (for one mana of each of those colors and an amount of unspecified mana) to become an Elemental creature until end of turn. These lands come into play tapped.[15] The set also contained a cycle of Zendikons, auras that turn lands into creatures.

Worldwake introduced Multikicker, a variant of Kicker.[16][17] This variation allowed for the kicker cost to be paid multiple times, with the effect repeated for each time it was paid. Landfall also returned but did not solely mark triggered abilities anymore.[18] Some cards now did additional static effects if a land came into play this turn. Allies, Vampires with their bloodied mechanic, and the equipment theme to the Kor also return, as do Quests and Traps. New traps have new alternative costs; some decrease their costs depending on the magnitude of a certain event.

The set also contains Eye of Ugin which referred to Eldrazi, the theme of Rise of the Eldrazi the expansion following this set. At the time of the release the function of or what Eldrazi even are was completely unknown and left up to the speculation of the players.

The set also contains Marsh Threader, who forms a matched pair with Cliff Threader from Zendikar.

The following cards were reprinted from previous sets: