From MTG Wiki
(Redirected from Worlds)
Jump to: navigation, search

The Magic: The Gathering World Championship (commonly referred to as Worlds) is a yearly tournament to crown the best Magic player in the world. It has been held annually since 1994, and is considered the most prestigeous Magic tournament, with a cash prize of $100,000 being awarded to the winner, the highest amount in a Magic tournament.

Since 1995, Worlds has been an invitation-only tournament. From 1996 to 2011, it was the event that concluded the current Pro Tour season, with invitations being awarded to high-level Pro players, players with a sufficiently high DCI rating, as well as the top finishers in each country's National Championship. The event featured an individual competition, with the winner being crowned the Magic: The Gathering World Champion, as well as a national team competition, where the winning team became the Team World Champion.

Since 2014, the World Championship has been a 24-player event featuring 14 rounds of Swiss play (seven each on the first two days) before a cut to the top four players, where they on the last day of competition play best-of-five semifinals and final matches. The World Championship currently features Standard and Booster draft, though prior to the 2017 World Championship, it featured Modern as well. In 2016, the schedule was as follows:[4]

Players earn invitations to the World Championship by winning certain high-level events or through a high finish in the Player of the Year race. As of 2016, the invitations are awarded to the following players:[3][5]

The remaining spots are awarded to the highest ranked players in terms of Pro Points earned in the previous season among those who are otherwise unqualified.

With the introduction of Magic: The Gathering Arena as a professional level medium in 2019, the system was revamped to a much more streamlined system[6]; there would only be 16 players, much like the 2012 and 2013 Championships, and has the eight title winners over the previous season and eight at-large players, four from the Magic Pro League and four not.

Additionally, competitors are awarded one Pro Point per match win in the Swiss portion of the event after the third, plus an additional two for each win in the knockout stage.

The team world championship was held from 1995 until 2011, when it was replaced by the World Magic Cup.

The first Magic World Championship was held at the Gen Con in Milwaukee, USA on 19–21 August 1994. Unlike later World Championship events, anyone could register for the event, which was a 512-player single elimination tournament held across three days. Among the competitors was later head designer for Magic, Mark Rosewater.[7] After two days of single elimination, the final four consisted of three Europeans – the top European players were considered to be ahead of the top American players at this time[8] – and one American, Zak Dolan. Dolan defeated Belgium's Dominic Symens 2–0 in one semifinal; the other was between two French players, Bertrand Lestrée and Cyrille DeFoucand, with Lestrée winning 2–0. Lestrée had been the pre-tournament favorite, but was defeated 2–1 in the final, making Zak Dolan the first Magic World Champion.

The second Magic Worlds Championship was held on 4–6 August at the Red Lion Inn in Seattle, USA. This was the first World Championship that was invite-only, and the first that included a team portion. It was a three-day tournament featuring 71 players from 19 countries. The players played ten rounds – five rounds of Sealed deck and five rounds of Standard – where points were awarded for each game win rather than match win.[9] This was also the first tournament where players weren't allowed to change their Constructed deck between the Swiss rounds and the elimination rounds.[10] In the final, the relatively unheralded Swiss player, Alexander Blumke, defeated France's Marc Hernandez 3–2. 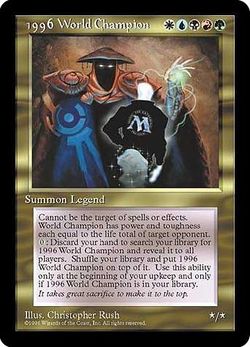 Promo card created for the 1996 Championship

The third Magic World Championship was held on 14–18 August at the Wizards of the Coast headquarters in Seattle, USA. It was the first World Championship after the birth of the Pro Tour, and it was the event that concluded the Pro Tour season. 125 players competed, and the tournament featured three formats: Booster Draft, Standard, and Legacy. In the final, once again a relatively unknown player prevailed, with Australia's Tom Chanpheng taking down the player many believed to be the best in the world, Mark Justice.[11] Chanpheng's win was commemorated with a unique card, 1996 World Champion.

The 2019 Season will conclude with the World Championship held February 2020.[12]

The partial 2020 pro season will not hold a World Championship.[12]

The next World Championship will take place at the culmination of the 2020–2021 pro season.[12]

The Worlds cards are prizes for Standard tournament World Championship Viewing Parties at WPN Premium stores. The first was released in 2020. They are foil and alternate art.

AS of the 2018 World Championship the World Champion]] for the player spotlight card. While they won't design it, they will consult with R&D on its selection and will appear pictured in the art.