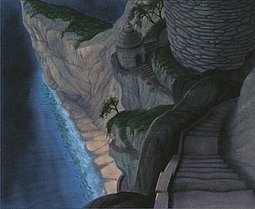 The Wizards' School was an institute of magical study on Ulgrotha, created by the planeswalker Feroz after the dwarves of New Freedom were driven from their home by Baron Sengir.

Feroz knew that whomever controlled the Greater Sea would end up controlling the Homelands, and it would be matter of a few decades before one side or the other took control. Though the sea dwarves sailed the seas, they were few in number, and weren't interested in playing watchguard. Feroz went to the Floating Island, and with the aid of his magics he built a great school there, and created wells of fresh water. When the Sea Dwarves returned that winter, they were astonished to find a huge, castle-like structure built on their island.

Within a few years, the Wizards' School was thriving, and had more that twenty Apprentices serving under the mysterious First Master. Though Feroz did not teach them anything of the worlds beyond their own, or anything of summoning or binding, he taught them enough so they could learn and discover for themselves. Even to this day, the libraries of the Wizards' School are filled with preserved journals which detail the spell research and history of all those who had worked in the sanctums and laboratories of the School.

After a short time, the First Master vanished, leaving behind a number of his own magical texts detailing white and blue magic, and the construction of certain clockwork artifacts. There was chaos for a short time, but in the end a Council of Wizards was created, led by a Wizard Savant. Their role was to ensure that the seas stayed open and clear for trading and shipping, and to control and maintain their own neutrality, and the peace between the other rising nations.