War of the Spark/Mythic Edition 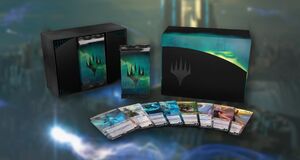 The Mythic Edition includes 24 War of the Spark boosters. Eight of these booster are clearly marked as "Masterpiece Boosters" and contain one of eight foil Masterpieces in addition to their normal rare/mythic rare card.

Each unit contains all 8 Masterpiece cards:

The Masterpiece boosters also contain an appropriate token or emblem:

On May 1, 2019, Wizards of the Coast launched the sale of this set on their eBay Hasbro Store. All 12,000 units sold out within five minutes, causing various problems with customers who couldn't pay and others who did pay but had their order cancelled.[4][5] In response, eBay gave a gift card to customers whose War of the Spark Mythic Edition orders were cancelled and Wizards promised to send "something special" to those customers as well.[6]