War of the Spark

War of the Spark is the 81st Magic expansion. It was released on May 3, 2019.[3][4][5] Officially, it is not part of a block. However, it is part of a series of three consecutive sets on the same world, unofficially referred to as the Guilds of Ravnica block.[6] It covers the event of the same name.

War of the Spark contains 264 cards (15 basic lands, 101 commons, 80 uncommons, 53 rares, 15 mythic rares), and includes randomly inserted premium versions of all these cards. Ten additional cards are found in the set's planeswalker decks (2 mythic planeswalkers, 2 rares, 2 uncommons, 2 commons, and 2 common Guildgates). These are numbered #265/264 to #274/264. A unique Buy-a-Box promotional card numbered #275/264 is also considered to be part of the set. While all previous sets on Ravnica focused on the ten Ravnican guilds, this set focuses on the culmination of the Bolas Arc simply using the world as a backdrop.[7][8][9] Mark Rosewater calls it an "event set", meaning it is built around an event rather than the plane.[10][11] As a special feature, the set features a total of 36 planeswalkers cards (39 including the Buy-a-Box promo + 2 in the planeswalker decks.[12][13][14] Each booster pack contains a planeswalker card,[13] and all planeswalkers are new cards (no reprints).[15]

The set is accompanied by the first major paper Magic novel after an eight year break.[16] 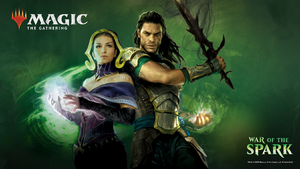 War of the Spark key art

The storyline and set revolves around the fight between the Gatewatch and Nicol Bolas. The fight turns into an all-out planeswalker war. Dozens of powerful planeswalkers, from many disparate realities, unite against the elder dragon, who has claimed dominion over Ravnica and is perilously close to completing the Elderspell that harvests sparks and will grant him "ultimate power" and godhood. As they fight alongside the Gatewatch—led by Chandra Nalaar, Jace Beleren, and Gideon Jura—against Bolas and his relentless army of Eternals, nothing less than the fate of the multiverse is at stake.[17] Little do the Gatewatch suspect that Bolas has not only accounted for their interference, but he is practically relying on it.[18]

The cards that represent the Story Spotlights in War of the Spark are:

In addition to the novel and its sequel (both by Greg Weisman) and the prequel by Django Wexler, part of the story appeared in six Magic Story chapters written by Greg Weisman.[19] Like the books, these were published after the set had been released. 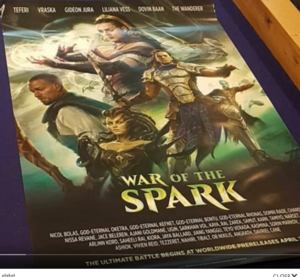 War of the Spark "movie-style" poster

War of the Spark is sold in regular 16-card boosters (one card being a marketing card and another one being a planeswalker), single color theme boosters[20], two planeswalker decks, and the War of the Spark bundle. The planeswalker theme of the set was revealed in a teaser that featured the art of the 36 planeswalker cards with an added stained-glass effect.[21][22] The boosters feature art from Liliana and Gideon (both from the set's key art), and from Teferi, Time Raveler.[23]

Each paper booster pack contains a planeswalker. This doesn't apply to 8-card "Arena packs" on MTGA.[24]

Preview season told a story in "scenes". All cards previewed on a single day had a connection to a story point, an event, or a key location in roughly chronological order.[25] 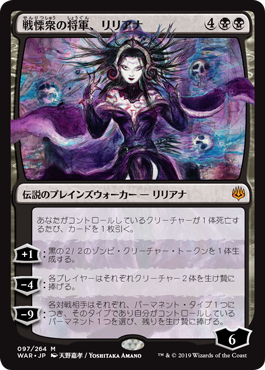 All 36 planeswalker have a 50% chance that the regular artwork of the planeswalker card will be replaced by an anime-style alternate art card in Japanese-language War of the Spark boosters only. The Japanese boosters were made available to retailers around the world.[32]

These cards will also be available in WPN promo packs during the Core Set 2020 play season, appearing in roughly 1:4 of packs. The alternate-art planeswalkers have only been printed in Japanese, but will appear in promo packs around the world.[32]

The sixteenth card in the boosters is a token creature card or an emblem, with advertisements on the back side. There are a total of nineteen tokens and emblems:[33][34]

War of the Spark Mythic Edition is a special draft-sized booster box. It contains eight masterpieces. 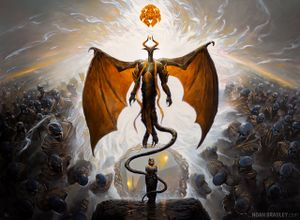 The keyword action Proliferate from the Scars of Mirrodin block sees a return.[43][36] When a player proliferates, he or she chooses any number of players and/or permanents with a counter on them, then puts another of those counters on these players or permanents. However, a rules change has been implemented.[36] Formerly, you had to choose a type of counter already present and added one counter of that type, now you are adding one counter of each type already present.[44]

A new mechanic is Amass. "Amass N" means put N +1/+1 counters on an Army creature you control.[45] If you don't control one, create a 0/0 black Zombie Army creature token first.[36] It appears in

because it is flavorfully connected to Bolas’s army.[46]

Affinity for artifacts, last seen in the Mirrodin block, appears as a one-off on Tezzeret, Master of the Bridge. It reduces the mana cost of a spell by the number of artifacts that player controls.[47]

There is a small tribal theme for zombies. Some notable creature cards give bonuses to zombie tokens, depicted as members of the Dreadhorde.(Eternal Skylord, Vizier of the Scorpion, Dreadhorde Twins and Gleaming Overseer).

War of the Spark features the following limited archetypes:[48]

War of the Spark introduces the Army creature type. The Army functions together much like how R&D makes single creature cards that are flavored as a group of beings.[46]

War of the Spark has eleven cycles.

War of the Spark has (at least) two mirrored pairs.

Main article: War of the Spark/Trivia