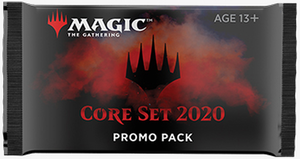 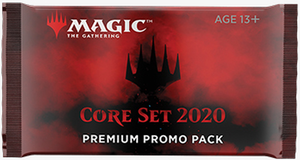 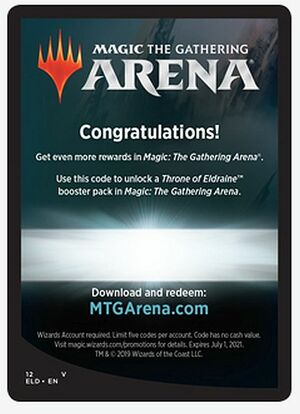 The universal promo pack is a pack of Magic: The Gathering promotional cards provided by Wizards of the Coast to WPN stores from Core Set 2020 onward.[1][2] Promo packs are not tied to specific events or programs and can be rewarded at any event, at the store's discretion. The packs replace dedicated cards for FNM, Draft Weekend, Magic Weekend and Magic Open House.[3][4]

Regular WPN promo packs were announced to contain the following:[1][6]

Starting with the second set to feature promo packs, Throne of Eldraine, the basic land was replaced by a MTG Arena code card, good for a booster pack on Magic: The Gathering Arena.[7]

One in four of the packs the store receives has all-foil contents (clearly identifiable from the packaging). These are suggested for 1st place prizes in tournaments as well as for events that cater to players that want to show off their decks, like Commander.[3]

For each set, promo packs may deviate from the regular contents described above, by including specials. The promo-stamp consists of a silver colored planeswalker symbol in the bottom right of the illustration.[8]

Wizards of the Coast recommends saving promo packs for programmed events in this way:[3]