Vorel of the Hull Clade is a human / merfolk hybrid biomancer from the Simic Combine on Ravnica.[1] 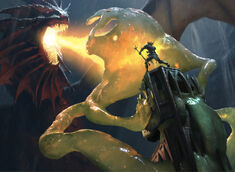 Vorel used to be the human leader of a small Gruul clan. But when he gave the order to concede territory to a growing Boros garrison in order to secure his own clan's turf, the clan turned on him. He was nearly killed before escaping. He then brought his shamanic skills and mindset to the Simic, discovering that his strategic mind actually suited that guild better. Experimented on, he received some merfolk traits. His emotionally charged background still shines through from time to time, leading him to be a bit more emotionally driven than others in the Combine.

Vorel was chosen as the Simic maze runner for the race in the Implicit Maze to restore the Guildpact.[2]

Vorel long believed that Prime Speaker Zegana should have been replaced with someone more prone to action, and he was the first and loudest advocate for Vannifar's leadership.[3] During the War of the Spark, the Simic participated in the guild meeting after the Elderspell was cast, and Vorel was sent as a representative for Vannifar.[4] Vorel told Ral Zarek that Vannifar was a fighter and had been preparing for war long before Bolas was known to be a threat. Ral then wondered the obvious question of who exactly was Vannifar preparing to war with before Bolas.

During the War of the Spark he led the Simic terraformers, super-soldiers and merfolk into the battle against the Dreadhorde.[5] While Vannifar served as the representative for the Simic at the resurrection of Niv-Mizzet as the new Living Guildpact, Vorel was also present.[6]