Double Masters contains 332 cards (91 commons, 80 uncommons, 121 rares, 40 mythic rares)[4] and includes randomly inserted premium versions of all cards. Box toppers are numbered #333-372, VIP Edition full-art basic lands are #373-382, and the prerelease promos Wrath of God and Chord of Calling are #383 and #384. Every booster box of Double Masters contains 24 booster packs, each with fifteen randomly inserted game cards. The set is unusual in the fact that it features two Rare or Mythic cards in each pack. It also features two premium foil cards in each pack in place of one.[2][3]

Double Masters is sold in Draft Boosters only. It will be available in English, French, German, Simplified Chinese, and Japanese. The set has no MSRP, but the Magic store of Amazon.com set the price at $16.30 per booster pack. The boosters feature artwork from Breya, Etherium Shaper, Dark Confidant, and Wurmcoil Engine.

Each booster box includes two random showcase borderless non-foil box toppers, each being available as regular card in the set, too. There is a total of 40 box toppers. The box toppers are numbered #333 to #372. 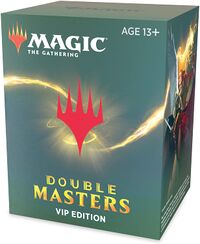 For this set, a so-called VIP Edition replaces the Collector Boosters. Each package of 35 cards contains:[5][6]

VIP Edition is available in English and Japanese only.[6] The full-art lands are reprints of the Battle for Zendikar by Noah Bradley, and the Unhinged set by John Avon. These lands were chosen long before Wizards of the Coast learned that Bradley had engaged in inappropriate sexual conduct with members of the Magic and artist community. Therefore, they were not able to replace the lands in time.[6]

R&D has doubled everything about Double Masters. Double the rare slots, double the box toppers, double the first-picks in Draft. Several cards also have doubling mechanics, including the copying of spells and permanents.[10]

Based on the the design of an unreleased Artifact Masters, the set also heavily focuses on artifacts.[4][11] 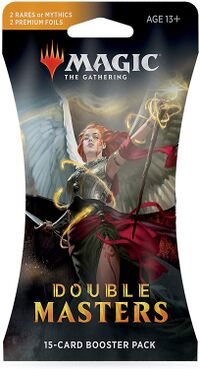 The following are all new to Pauper:

Similar to the extended-art Cultivate in Core Set 2021, eight of the box toppers are printed with rare set symbols, while their regular counterparts are common or uncommon.[12]

Some Commander cards are released for the first time without a foil treatment.[15]