Urborg is a large tropical and particularly marshy isle and one of the more prominent of the Burning Isles of Dominaria.[1] It is known for being one of the regions with the most concentrated amounts of black mana on Dominaria. Urborg's more powerful witches and necromancers are constantly in a power struggle for control over the island.

Urborg is a swampland of bogs and weed-choked waterways bordered by thick green vegetation and plagued by insects.[2] The ash-filled sky makes the sunlight dim and gray. Old ruins are buried under the vines and moss, some indication of the long history of this land. Some feature the heavy shapes of monolithic Thran structures, but most of the ruins have the spiky organic look of Phyrexian remnants. 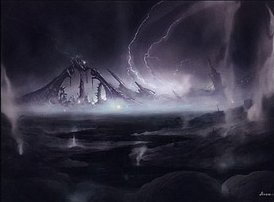 The Tomb of Yawgmoth. Art by John Avon.

In the mythic past, Urborg was the seat of Crosis, the primeval dragon of death.

Prior to the Brothers' War Urborg was a lush jungle, but when Urza activated the Golgothian Sylex the island became partially submerged and turned into a swamp. The planeswalker and panther warrior Windgrace was born during this time and became a prominent leader of his people.

Legend has it that Urborg was once only the name of a city upon the isle.[6] This hellish demesne was controlled by the lich Nevinyrral, who was at war with Bogardan. Little is known of the war, as it predates the Ice Age, but legend states that Nevinyrral was outmaneuvered and the city of Urborg was swallowed by a volcano that tore up from the ground directly beneath it.

During the Phyrexian Invasion, Urborg was one of the first places to fall into the hands of Phyrexia. The Stronghold was transplanted into the center of a volcano during the Rathi Overlay and Multani later transplanted part of Yavimaya to Urborg's edge to have Yavimaya's powerful inhabitants join in on the last great battle of the Invasion. It was in the skies over Urborg that Yawgmoth was finally defeated and it was here that Freyalise erected the memorial.

Urborg was one of the many sites of the multiverse-threatening time rifts. This particular time rift was located directly over the ruins of the Stronghold. The time rift was closed by Lord Windgrace at the expense of his life. Urborg became even more filth-ridden than in earlier years, as corpses of Phyrexian abominations had turned many bogs on the island into pools of glistening oil.

After the invasion, the panther planeswalker Lord Windgrace returned to his homeland, intending to restore order and lead it into a new era. He established firm rules limiting the possession and use of technology, such as powerstones and machines that that might carry the Phyrexian oil. He deputized a number of human and panther warriors as the Windgrace Acolytes, who acted as a military and police force for Urborg.[7] They used trained insects, called gladehunters, to track down artifice and artificers alike.

Lord Windgrace sacrificed his planeswalker's spark and then his life to close the time rift above Urborg. Even after his death, his Acolytes continued their crusade.

After the Mending, the Windgrace Acolytes began to unravel. The return of mana reinvigorated Urborg's sorcerers, witches, and necromancers, making them harder to contain.

Under the Cabal[edit | edit source]

Sixty years after the Mending, The Cabal under Belzenlok have shifted their capital from Otaria to Urborg.[1] Belzenlok styled himself as "King of Urborg". Meanwhile, the treefolk of Yavimaya's remnant are still present on the island,[1] and the forest has also given birth to the elemental avatar Muldrotha. The panther warriors have been almost completely wiped out.[2]

Up until the Phyrexian Invasion, Urborg was ruled by several factions, many claiming to be Nevinyrral's undying lieutenants. Each one asserted that the site of the original city existed within its borders, and this ancient contention had split the land into many factions. Among them were several human and undead lords, the Nightstalkers, and the panther warriors. One of the more well known of the factions was the family of Crovax. Urborg has also always been the home to drakes, elves, and various kinds of undead.

The Breathstealers are an ancient cult of fanatical religious assassins from Urborg known for their ability to kill with complete accuracy and utter silence. After the end of the Mirage War, the Breathstealers have been insinuating themselves into Suq'Atan society. Only the Breathstealers guild is said to possess both the knowledge and the desire to summon the dreaded Spirit of the Night, whom they worship. It is the ultimate honor for a Breathstealer to sacrifice himself to become a part of the Spirit of the Night made manifest. They can work minor magics, including controlling certain creatures.

With the Cabal came many cultists and Grimnant knights.

After the Mending, spirits and manifestations of dark magic in all shapes and varieties have built their own cities and towns throughout the swamps.[2][7] A small group of humans and panther warriors, calling themselves Free Urborg, resisted the reign of the Cabal.[7]

Some of the most famous denizens of Urborg were: