From MTG Wiki
(Redirected from Unlimited)
Jump to: navigation, search

Unlimited Edition, or Unlimited is the second edition of the core set. This white-bordered set consisted of the same 302 cards as the Beta print run. It was released in December 1993. 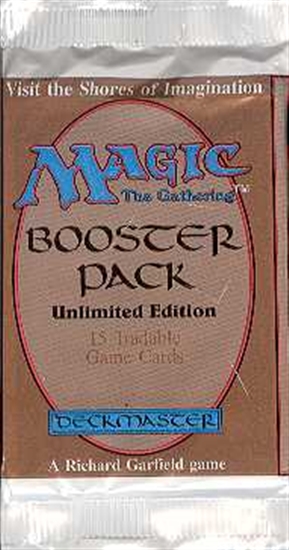 For information on the mechanics and themes, notable cards, storyline, design and development, cycles, creature types, and points of interest in this set, please see the Beta set.

The original plan of the creators had been to mark unlimited sets with a gray border, not white. They found out that this was technically too difficult, and had to settle for what they considered to be the much less aesthetically satisfying white.[2]

This set was released on December 1, 1993, after Beta had sold out as quickly as Alpha had. The print run was announced to be 40 million cards, the largest yet. Cards were available from mid January 1994 through mid March 1994.[3] The cards were sold in 60-card starter decks and 15-card boosters. Wizards of the Coast instructed Carta Mundi to change the black border on the card frame to white, in order to maintain the collecting value of the initial Limited print run.

Unlimited was the first set to be officially titled as something other than just Magic: The Gathering. The "Unlimited Edition" label appears on the booster boxes, decks, and booster packs.[4] The rulebook was the same as for Beta.[5]