The tentatively called Unglued 2: The Obligatory Sequel or Wacky II: This Time it's Personal was a follow-up set for Unglued that was supposed to be released in Summer 1999. This Un-sets was designed by Mark Rosewater, but never published. Like its predecessor it was to be a silver-bordered parody set and was to be used outside of normal Magic expansions. This was an entirely different set from Unhinged, though that set reused some elements.[1][2][3]

When Unglued was to be released in 1998, people were very excited. It was something new and different Wizards of the Coast hadn’t done before.[4] Unglued was instantly perceived as a smash hit, and it was decided to make a sequel. Right away, even before the first set even came out, Mark Rosewater started doing work on the second one. However, Unglued was overprinted, and in the end it netted a negative profit.[5] Because it didn’t do that well, comparatively because of the overprinting, the second set ended up getting put on hiatus and never made.[6]

A major theme of Unglued 2 was poison. Poison had originally been a major theme of Tempest but R&D had at the time decided to phase poison out of Magic. Rosewater figured silver border would be the perfect place to resurrect the mechanic. Poison was keyworded with a number. What this meant was when this creature dealt combat damage to you, you got that many poison counters. "Poison: N" would later be redone as Poisonous N in Future Sight.

Like Unglued had chickens, its successor had animated vegetables, which Rosewater picked to be the poison creatures. In addition, every artist was asked to hide a vegetable in his or her art. Note that some of the art from Unglued 2 was used in Unhinged, so there are also some hidden vegetables in the art of Unhinged.

Another theme of the set was voting. There was a cycle of voting cards, giving every player one vote and then spelling out how people could get additional votes. This idea was later used in Conspiracy.

The set also used scratchcards. There would be an extra print sheet with scratch-off cards, so that players would get one in every booster pack. Each card would have three scratch off lines on it and each time you cast it you would scratch one line off. Each scratch-off card had ten different version so that players wouldn't know which version they had. The art of these cards looked like scratch off lottery tickets. There were two in each color.

Like Unglued, Unglued 2 further had a die-rolling theme. Another feature was the often snarky reminder text on the cards. On top of that, Wizards of the Coast were considering having bubble gum in each of the booster packs.[7]

Since this Un set never made it to print, individual card designs crept their way into tournament-legal sets.[8] Some art of Unglued 2 was used for Unhinged Arena League promos.[9] 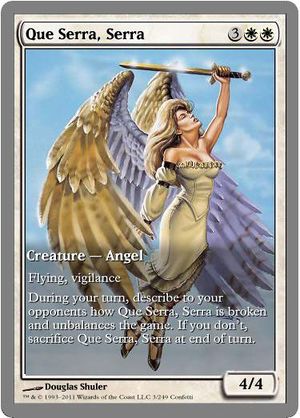