Tuktuk the Explorer was an adventurous goblin, brave for his kind and curious, always willing to venture deep into the vaults and chasms where Zendikar kept its best shinies.

Tuktuk wasn't a particularly remarkable fighter or a particularly charismatic leader, but his curiosity burned like pure flame. He was also very, very dumb.

Tuktuk knew the only way he would earn respect in his tribe was to capture a treasure like no other ever found. Vowing to return with the most amazing artifact goblinkind had ever seen, he ventured into an unknown, famously dangerous ruin—because remember, he was very, very dumb.

The ruin Tuktuk chose had been polluted by thousands of years of Eldrazi influence. The walls were crusted with unnatural rock formations that mimicked the carvings of hedrons, and the air was sodden with the soundless utterances of ancient monstrosities. Tuktuk was afraid, but he trundled on, his bravery reinforced by his tragic stupidness.

As soon as he found his prize, Tuktuk was promptly killed. He discovered a massive, profoundly powerful hedron fused into the cavern wall (unluckily), touched it (stupidly), and triggered an ancient rune-trap (inevitably). The trap exploded with dark energies, rupturing his skin and fragmenting his bones—but also setting free a measure of Eldrazi magic. And what happened next was most strange. 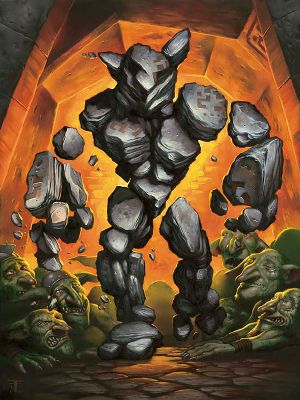 The mystical hedron trap, designed to protect the integrity of the ruins, struggled to replace what had just been lost. The Eldrazi-soaked magic drew stone from the walls of the ancient chamber, fusing it together and forming it into a roughly humanoid shape. What resulted was massive and powerful stone golem, but the golem bore a strange resemblance to the dead goblin interloper. Although Tuktuk's guts were splattered around the cavern, his mind and memories became trapped within the stone, giving it goblinoid form—and mingling Tuktuk's mind with ancient Eldrazi magic.

The stone creature that resulted was not Tuktuk. But in a way, somehow, it was.

When the golem-goblin emerged from the ruin, his new, daunting form amazed and enthralled his tribe-mates. They marveled at his formidable form, his dauntless bravery, his muscles made of pretty stone artifacts. They dubbed him Tuktuk the Returned, and he became the most famous of his people. That very day he was made chief of the clan, which went on to be called the Tuktuk tribe.

He taught the Goblins of Zendikar that they could get stronger by eating hedrons and other magic rocks. Ironically, this turned out to be his undoing: Zada, Hedron Grinder,[1] listening to Tuktuk's wise advice, ended up consuming Tuktuk himself.