The tombstone icon, or tombstone symbol, is a graphic in the upper-left-hand corner of a number of Odyssey block cards with graveyard-active or -relevant abilities. 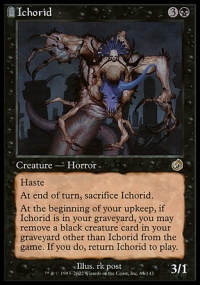 Ichorid (Torment), with its recursion/self-reanimating ability, is one such card that features the tombstone icon.

Due to the mechanical and thematic focus on the graveyard in Odyssey block, the tombstone icon was designed to be featured on cards from the block's sets — Odyssey, Torment, and Judgment — so as to "make players' lives easier".[1] The practice of placing a tombstone icon was not carried over to future expansions or blocks, but the tombstone icon has since been seen on the Time Spiral "timeshifted" reprints of Valor and Call of the Herd.

The original plan was to make it a permanent addition, but it couldn’t work with the new card frame (starting two blocks later in Mirrodin) so R&D decided to just make it a block thing.[5]

Tombstone Icon
An icon that appears in the upper left of some Odyssey block cards that has no effect on game play. See rule 107.9.

After technology changed it became possible to combine the Tombstone icon on modern bordered FNM card.[6]