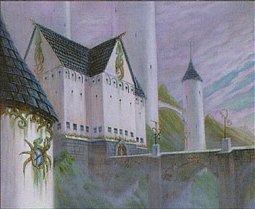 The original Academy was used by its founders to train an elite cadre of mages to lead Dominaria's defense in the upcoming Phyrexian Invasion and to conduct research into weapons that could be used in the war. Although originally run by Urza himself, as it expanded others such as Barrin, Jhoira, and Rayne, assumed chancellorship. Especially as Urza's mission took him on longer and further journeys throughout the planes. Notable students of the academy include Teferi, Jhoira, Gatha, Ertai, and Hanna.

The Academy was responsible for many important magical creations throughout its history. Amongst these was the discovery of slowtime water capable of letting mortals live vastly extended lifespans (as used by Barrin, Rayne, and Jhoira, among others), the creation of a time-traveling device, the eugenic manipulation of the Metathran and the Bloodline project, and the building of the Titan Engines, the Soul Bombs and the Skyship Weatherlight.

When Jhoira's life was taken by a Phyrexian sleeper agent during a Phyrexian assault in 3307 AR, Karn used Urza's time machine to go back and save her; though he succeeded, the time machine suffered catastrophic failure, destroying the first academy and leaving Tolaria a shattered temporal landscape.[3] This also created the Tolarian Time Rift. 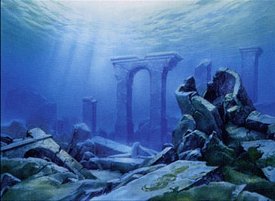 The Academy's ruins. Art by Zoltan Boros and Gabor Szikszai.

The original Academy was destroyed once again by the Phyrexians during the first stage of their Invasion, while Barrin destroyed the whole island along with all of its occupants while grieving the loss of his daughter Hanna.

Nowadays, there exist five particularly well-known Tolarian Academies (though they are not necessarily the only ones). These are located at Tolaria West in the Spice Isles, at Lat-Nam, at Orvada (on the island of Walassa near the Burning Isles), Tolaria of the Depths underwater at the ruins where Tolaria originally stood, and a Shadow Academy that doesn't have a particular location.[2] The latter is a secret network claimed to be linked by a pocket dimension.[1]

Within these academies there are three main pedagogical lineages: Urzans (systematical and cynical, focusing on artifice, temporal mechanics and genetics), Barrinites (humane and ethical, focusing on sorcery, temporal mechanics and administration), and Raynians (focusing on improvement of artifacts and recruitment).[1] There is also a secret cult of Phyrexian sympathizers (The "Society of Mishra") and a strain of scientists performing illegal genetic experiments ("Gathans").

The primary source of income for the Tolarian academies is tuition and providing expertise to those in need of scientific or magical help. They have also branched out into more practical and immediately vital sciences like Agriculture and Aquaculture.[1] The campuses maintain a network of regular ocean-sailing packet ships that move news and passengers from one campus to another. They hold right-of-passage agreements with a variety of (suboceanic) nations.