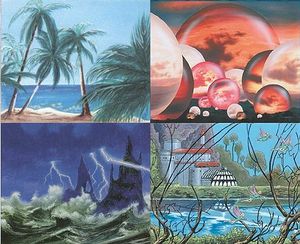 Tolaria was a legendary island on Dominaria, home to the original Tolarian Academy.

Most people thought of Tolaria as a myth—a land of great wealth that was lost to an unknown curse that covered the island in terrible, devouring mists. For centuries sailors told tales of that land, of people who entered the isle's interior only to return weeks later without any knowledge of the time that had passed, or worse still, of people gone for hours, but aged years.

Before its destruction, Tolaria lay in the middle of the ocean, far to the west of Jamuraa and to the south of The Domains. It was a large, tropical isle, lightly forested, with palms on the shore and hardwood trees on the interior. It was part of a chain of islands, most of which were likely uninhabited.

Before the founding of the Academy, Tolaria was home to many shapeshifters, such as the Morphling. After the founding of the Academy, human wizards flocked to the island. Other creatures native to Tolaria include faeries, drakes, and sentient illusions, and merfolk and sea serpents dwelt in the surrounding waters. Finally, the island was the birthplace of the metathran race, created by the planeswalker Urza.

In 3285 AR, Urza and Barrin founded the Tolarian Academy. The island was the best choice for Urza's laboratories because Tolaria was placed far from any other land on Dominaria. Urza wanted to keep its existence a mystery, and knowing that Phyrexian sleeper agents never appear in child form, his new students were exclusively children.

Urza intended to gather all possible knowledge on Tolaria in order to stop Phyrexians. His first plan was to create a time machine. He wanted to change the ancient past, when still the Thran ruled Dominaria, and halt them on the path that would give rise to the horrors of Phyrexia. Because no living being could survive the temporal stresses of time traveling, Urza created a golem-probe, soon after named Karn.

Tolaria was almost utterly obliterated by Barrin's final spell, its ruins sunken beneath the waves, though a part of the island is believed to have survived the explosion—possibly the location of the Pendrell Vale, as it continued to emanate magic for hundreds of years after the Invasion. Although since then it was almost forgotten, on a tiny island in the Spice Isles scholars of magic decided to immortalize the memory of that great school by building a new academy. The island was named Tolaria West, honoring the memory of the original Tolaria.[1]