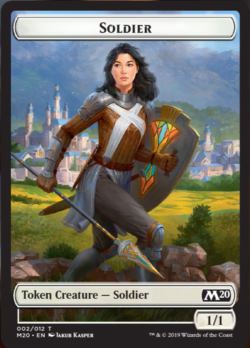 A token is a permanent that is not represented by a regular card with a casting cost.[1][2]

Richard Garfield created tokens for Alpha, as opposed to counters, to make The Hive possible.[3][4] Usually, but not always, tokens are creatures. This wiki presents a comprehensive list of all tokens.

Tokens are made of different cardstock than regular cards. They don't have the opaque layer in the middle.[5][6]

Because Magic Online needs to represent all the tokens in the game, art needs to be created for even the most insignificant tokens. And for some of that art, Magic Online is the only place it appears.[7][8]

There were so many cards in Fallen Empires that produced tokens and/or required counters that Wizards of the Coast issued a cardboard sheet of them in Duelist #4.[9]

Citadel Gaming released a series "Magic Tokens" starting in 1995 made of a plastic material.

Special token cards were first printed for Unglued.[10] Mark Rosewater has written that these cards were inspired by unofficial accessory cards used by Japanese players.[11] Unglued's tokens proved so popular they spawned the new tokens given away in the Magic Player Rewards program.[12][13]

Like for regular cards, the card frame for tokens was updated with Eighth Edition. "Token" now appeared in the type line, though it never became an official card type.[14]

Since Tenth Edition tokens appear as marketing cards in booster packs. Unlike earlier tokens, they don't have a regular card back, but feature advertisements instead. They also stopped printing "token" on the type line.

Starting with Magic 2015 "Token" is now printed as a supertype on the type line.[15]

For Battle for Zendikar, the ratio between token cards and other marketing cards was shifted heavily in favor of tokens. The new ratio is approximately 9:10 for tokens. Tokens’ rarity is based upon the rarity of the cards that make them.[16][17]

The first double-faced token was released as a special FNM card during the Innistrad block on April 6, 2012 (which featured a full moon). It fittingly represented a 1/1 human on one side, and a 2/2 wolf on the other.[18] The Avacyn Restored prerelease Helvault kit followed up with double-sided Angel/Demon tokens.[19]

The next chance for double-faced tokens came when the developers of Commander 2014 didn't have to share the tokens in that set with the brand team, and the production constraints that mandated Magic backs on the Duel Decks' tokens didn't apply. They created double-faced tokens which featured a different, unrelated, token on each side of the card.[20]

Double-faced tokens made another appearance in pre-release packs for Eldritch Moon. These tokens are a 2/2 Zombie on either face and are foil. From 2017 on, double-faced tokens were made available as prizes for the Magic League.[21]

The Bundle for Amonkhet contained a pack of double-faced tokens that comprise a complete set of every token in the expansion. 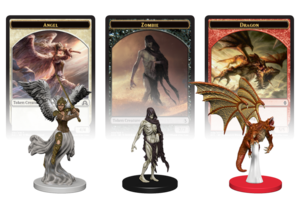 Also in 2018, Ultra Pro produced a series of Magic: the Gathering tokens in durable hard plastic. These can double as life counters.

Token
A marker used to represent any permanent that isn’t represented by a card. See rule 111, “Tokens.”

Teysa, Orzhov Scion has the ability: "Whenever another black creature you control dies, put a 1/1 white Spirit creature token with flying onto the battlefield." "Dies" means precisely "is put into a graveyard from the battlefield" (rule 700.4). If you have a black creature token that gets destroyed, it will go to the graveyard, trigger Teysa's ability, then disappear, and finally, the ability will be put on the stack. However, the token cannot be the target of spells or abilities whilst in the graveyard.

Momentary Blink reads in part: "Exile target creature you control, then return it to the battlefield under its owner's control." If this spell is used on a creature token, it will be exiled, but it cannot come back to the battlefield and so stays in the exile zone. It will cease to exist when state-based effects are next checked.

All colors can create creature tokens. White and green, as the two primary creature colors, do it most often.[23] White tends to make smaller creature tokens; these usually are 1/1s, while green tends to make larger ones, from 3/3 and up. White often will make multiple tokens at once since they're smaller. Black most often makes 2/2 Zombies. Red most often makes 1/1 Goblins. Sometimes red's token creatures are a little bigger and get exiled at end of turn.

The effect to increase the number of tokens as they're being made, or making more after they've already been made, is also primary in blue and green (e.g. Doubling Season.[23] White is secondary.[23]

The first non-creature token was the enchantment token copy of Imperial Mask that can be given to your teammates. This appeared in Future Sight.

Estrid, the Masked is the first, and so far only, card to make an aura enchantment token.[24]

Enchantment tokens returned in the Mystery Booster set, where the test card Celestine Cave Witch lets you sacrifice insects to create curse enchantment tokens, and Domesticated Mammoth arrives on the battlefield with an aura token of Pacifism on it.