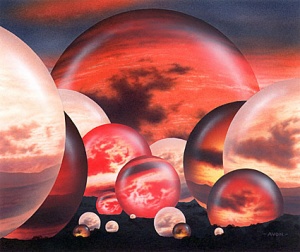 The rifts or time rifts were fractures in the planar fabric of Dominaria and to a lesser extent other planes (such as the Dead Zone on Ulgrotha). In the greater scheme of things the rifts resulted from the imbalance between the primal forces of the Multiverse and the power of godlike planeswalkers or similar spells.

Each of the major rifts was caused by some catastrophe, and in almost every case a planeswalker was involved. Sometime after Karona's destruction, the rifts that accumulated over Dominaria's history proved too much — the damage to the plane was too severe to allow for self-repair.

While each rift had a unique "personality" linked to the circumstances of its creation, they all had some common properties: They cut off the plane from its mana and caused anomalies in space and time. They also influenced each other, and with each additional rift, the others grew.

If a planeswalker would 'walk near a rift, they would be afflicted with pain and glimpses of the realities that lie beyond the rifts. As such, 'walking near a rift would often cause the planeswalker to momentarily lose consciousness and become dazed and confused. Teferi was noticeably affected by the rifts in his first few encounters with them, while Freyalise was able to retain her focus. Nicol Bolas seemed to be unaffected or undisturbed by the rifts when he planeswalked in Madara near the Talon Gates while fighting Teferi.

The rifts allowed creatures, people, objects, and spells from the past, alternate timelines, and possible futures to be pulled into the present day, while present Dominarians were sometimes caught up in the rifts and sent to times other than their own. Some wizards used the rifts to their advantage, learning to draw magic through them.

When phased-out Shiv was about to return, Teferi realized, that without repairs Dominaria would be destroyed. Being the Nexus of the Multiverse it would take every other plane with it in a chain reaction.

The keywords split second, vanishing, and suspend are associated with the time rifts.

Prior to the Mending, there were eight major rifts in existence (though numerous smaller ones sprung up across Dominaria). Here they are presented in the chronological order of their creation:

Fifteen to twenty thousand years before the events of the rift crisis, the first battle between planeswalkers on Dominaria took place in Madara.[1] It was a fight to the death between the elder dragon Nicol Bolas and an unknown demonic leviathan. Their battle destroyed one-third of the continent and caused the first temporal damage to the plane. The rift was located at the Talon Gates, a remnant of that conflict.

When Ravi rang the Apocalypse Chime the damage propagated throughout various planes, in effect creating some sort of connection between Ulgrotha, Dominaria and Kamigawa.

The rift was closed second to last by Nicol Bolas, using Leshrac's powers, killing the Nightwalker in the process.

Urza's Sylex Blast changed the face of the world, brought on the Ice Age, and led to the formation of the Shard. In addition to these visible effects the plane itself was damaged, resulting in Yavimaya's rift. When the rifts worsened, the sentient forest tried to heal the damage, without success.

Under the influence of Leshrac, Jeska used Radha to seal the rift, causing the warrior to lose her potential to become a planeswalker.

In contrast to the other rifts, the Tolarian rift was felt immediately after it came into being. Urza's failed time travel experiment caused temporal disruptions throughout the isle — there were bubbles in which time flowed much faster or much slower.

During the Phyrexian Invasion of Dominaria, Barrin obliterated the whole island, worsening the damage beyond repair. Fortunately, Karn was able to travel back in time and mend the rift just before Barrin cast his spell.

At the beginning of the invasion, Teferi phased out a part of Shiv and Zhalfir, leaving a hole in Dominaria. When the time came for Shiv to return, he realized that it would not fit. Teferi successfully healed the damage, losing his spark in the process. Closing the first rift allowed Shiv to phase back in.

Zhalfir was phased out along with Shiv. Under the influence of Leshrac, Jeska used Radha to seal the Zhalfiran rift. Zhalfir was not able to phase back in, however, and Teferi remarked that it was lost.

The rift at Urborg did not involve any planeswalker, but was instead a side effect of the Rathi Overlay with the arrival of Volrath's Stronghold. Phyrexians from an alternate timeline in which the Ice Age never ended were coming through it. Eventually, Lord Windgrace realized what he had to do and gave up his life to heal the rift, making it the third to be closed.

To protect Skyshroud Forest, Freyalise relocated it when the Rathi Overlay began. Similar to the rift in Urborg, it was linked to an alternate timeline in which the Phyrexian Invasion was successful. Freyalise gave her life to seal the rift, and save for a single tree, the whole forest died with her. It was the second rift to be sealed.

The last major rift to come into existence was created when Karona, the incarnation of Dominarian magic, was destroyed. Because of Karona's nature Otaria's rift was diffuse, widespread, and the most difficult to seal. Only with the help of Venser and Radha, and her own sacrifice could Jeska close it.

With the last major rift sealed, the Great Mending began.

Effects on other planes[edit | edit source]

Since Dominaria is the Nexus its damages were also felt on other planes.

On Kamigawa, the veil between the utsushiyo and kakuriyo weakened. This enabled Konda to steal That Which Was Taken, thus beginning the Kami War.

In the dual-plane of Lorwyn-Shadowmoor, the mending accelerated the cycle in which the plane alternated its structure by decades.

The rifts affected the stability of Mirrodin's mana core, causing the five moons/suns to erupt. It also allowed Memnarch to prevent Karn from entering the plane.

Ravnica became isolated from the rest of the Multiverse. The spirits of the dead could no longer move on to afterlife, in the course of time this resulted in the Ghost Quarter of Agyrem, a "blister" on the plane of Ravnica.[2] It was reachable through a rift named The Schism.