Throne of Eldraine introduces decks designed for the Brawl format.[1][2]

These 60-card decks use cards from throughout Standard, from Guilds of Ravnica all the way through Throne of Eldraine. There are 20 unique cards in these decks that aren't found in Draft Boosters (but they can still be found in Collector Boosters.) Each deck has seven of them — four cards unique to that deck, one card shared with one other Brawl Deck, and two cards shared with each other Brawl Deck. These cards are all legal in Standard, Brawl, and all other formats that allow the latest sets (or at least ones where cards in new sets are legal). A life wheel is included in the packaging.[3] However, this product doesn't come with any printed tokens.

Melissa DeTora from Play Design was in charge of design for the decks. She selected the colors based on needs for Brawl commanders and designed several of the cards. But then she led a team of four designers from around the country, all external to Wizards of the Coast and under contract, to actually design the decks and provide feedback. This crew was a mix of different styles and backgrounds, each trying to grab different aspects of the community. Each designer led the design of a different deck. The four designers were Emma Handy from StarCityGames, Henry Davis (a local player who had done a lot with community building in the Seattle area), Jeremy Geist (runner up of the Great Designer Search 3), and Stephanie Schelble (a casual player from New York). 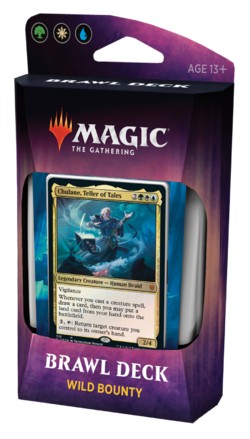 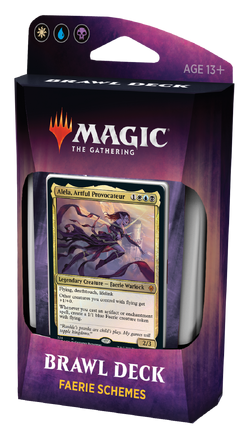 1 Mace of the Valiant 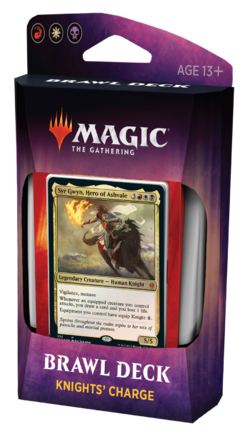 1 Knight of the Ebon Legion

1 Belle of the Brawl

1 Mace of the Valiant 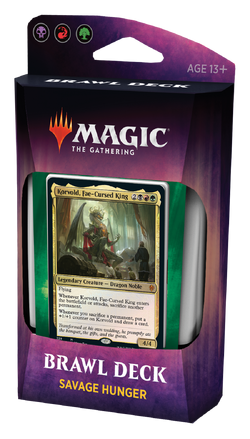 1 Bake into a Pie

1 Rhythm of the Wild

The 1v1 MTG Arena digital version of this deck replaces Gluttonous Troll and Chittering Witch with Mask of Immolation and Izoni, Thousand-Eyed.[4]

In the article on the decks by Gavin Verhey, as well as during the MTG Arena Courtside Brawl event, this deck was erroneously called "Savage Hunter".[2]