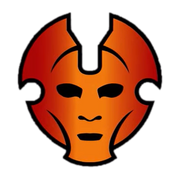 Like its predecessors Theros Beyond Death has an ancient Greek themed top-down design, making use of many mythological tropes (Heroes, Monsters, and Gods).[5][6]

The set's expansion symbol is a Mask of the Returned. 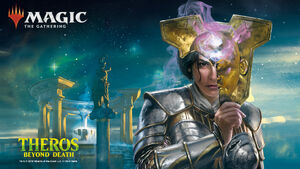 There is no ebook for Theros Beyond Death, nor were there weekly updates for Magic Story.[11][12] It was revealed that the blowback from War of the Spark: Forsaken caused the Theros Beyond Death fiction to be delayed.[13] The Franchise Team is trying to find the correct time and channel to release it at a later point in time.[13]

The set focuses on the Underworld of Theros over the normal world of the plane,[14][15] with a major plot point being the return of Klothys, the Therosian god of destiny.[16] It features the planeswalker Elspeth Tirel[17] and her torturer Ashiok.[18]

The Gods are at war, and they bring their champions to fight. Elspeth breaks free and defeats Heliod with a weapon created from her past traumas. Klothys finds out about Elspeth escaping the Underworld so she is sending someone to bring her back to the Underworld or capture her.

The cards that represent the Story Spotlights in Theros Beyond Death are: 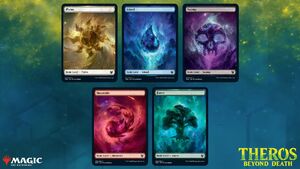 Theros Beyond Death is sold in regular 16-card Draft Boosters (one card being a marketing card), mono-colored Theme Boosters, two planeswalker decks, the Theros Beyond Death bundle and a Deck Builder's Toolkit.[19] The set also features Collector Boosters.[10][20] For the first time, the Theme Boosters will contain two out of a possible 10 rare cards that are not part of the regular set and thus are not available in regular Draft Boosters.[21] The Promo Pack also features some non-Standard rares that are focused on Commander.[22] 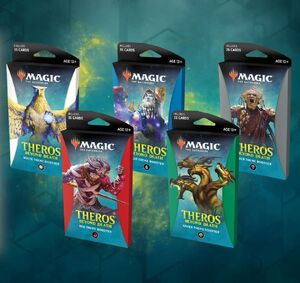 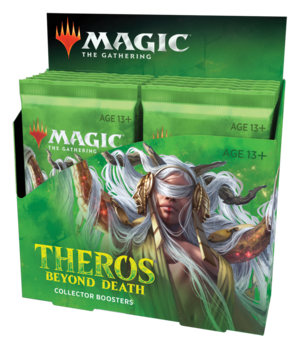 The sixteenth card in the boosters is a token, with advertisements on the back side.[27]

Theros Beyond Death introduces the keyword ability Escape; spells with escape can be cast from the graveyard for their escape cost.[28][29] The cost includes exiling a number of other cards from the graveyard. Certain creatures receive an additional bonus as they escape.

Theros Beyond Death has twelve cycles, including one double cycle.

Theros Beyond Death has one mirrored pair.

Theros Beyond Death is the last expansion to feature Planeswalker decks.[33]