From MTG Wiki
(Redirected from The stack)
Jump to: navigation, search 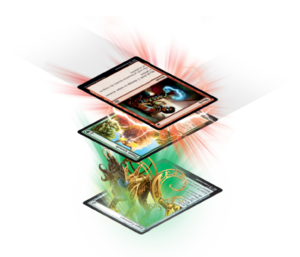 The stack is the game zone where spells and abilities are put when they are played and where they wait to resolve.[1][2][3]

Spells and abilities are put on top of the stack as the first step in being played, and are removed from it as the last step of resolving.

Stack
A zone. The stack is the zone in which spells, activated abilities, and triggered abilities wait to resolve. See rule 405, “Stack.”

Actions that use the stack[edit | edit source]

Actions that don't use the stack[edit | edit source]

An action that does not use the stack is called a turn-based action or a special action.