The Wanderer is a planeswalker introduced in War of the Spark. Nobody knows where she came from or her real name, but what they do know is that she is one of the most efficient and deadly warriors seen on any plane.

The Wanderer has long white hair and seems to hide her face behind a conical hat and wears white garb. Beneath the brim of her hat she actually wears a golden mask that covers her entire visage and even keeps her eyes in the shadow.[1] Because she admitted that she once was considered to be beautiful, Ral Zarek suspected that her real face is now scarred. The Wanderer didn't deny this and implied that Tezzeret was to blame for her disfigurement.[1]

The Wanderer is adept at swordplay, and is able to magically absorb kinetic energy and redirect that force through her massive sword.[2] The broadsword leaves a white mana trail in its wake when she swings it.[3]

Able to down the largest foes with a single stroke, The Wanderer is also cursed to make an effort not to planeswalk. Unlike other planeswalkers who are tired by the process of planeswalking, The Wanderer can planeswalk and then planeswalk again almost immediately - but if she doesn't focus, she will be pulled at random from plane to plane.[2] This also happens when she sleeps or falls unconscious. Her condition makes her uniquely attuned to the Blind Eternities. She feels every ripple across it and can sense a planeswalker's path longer than a typical planeswalker.

The Wanderer is centered in white mana. When she planeswalks, she disappears in a violent slash of white light.[1] 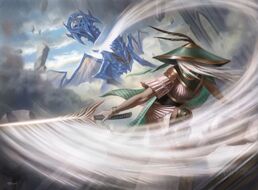 The Wanderer is able to channel kinetic energy to her sword

How she came to be this way and if her spark is different from all others may be at the heart of her endless journey through the multiverse and her desire to hide her identity. Whether she seeks a person, place or thing remains to be seen, but a peaceful resolution to her never-ending quest seems unlikely. She usually disappears quickly after a fight and stays hidden from investigators.

The Wanderer has an undisclosed history with Tezzeret and considers him an enemy and a possible threat to the multiverse.[1]

The Wanderer was lured to Ravnica by the Interplanar Beacon, and immediately became trapped there due to Bolas's use of the Immortal Sun. Alongside many other planeswalkers and Ravnicans, she fought against the Eternals of Bolas' Dreadhorde.[3] She and Sarkhan Vol apparently knew each other.

She was one of the few planeswalkers who chose to remain on Ravnica after Chandra disabled the Immortal Sun, helping the Gatewatch in their fight against Bolas. She survived the battle.

As her unique abilities allowed her to track Tezzeret and the Planar Bridge technology he carried, the Wanderer aided Ral Zarek in finding his target.[1] They eventually found Tezzeret in his fortress on Alara in Esper, once known as the Seekers' Sanctum. The pair were greeted by a squadron of etherium gargoyles in which all but the leader, Grokk, were destroyed. Ral and the Wanderer entered Tezzeret's base and battled against his minions and through multiple traps. Upon reaching Tezzeret, the Wanderer was knocked unconscious by the lead gargoyle and automatically planeswalked away.

After regaining consciousness, the Wanderer returned to Esper to investigate Tezzeret's fortress and found evidence of an organized abandonment. Back on Ravnica, the Wanderer relayed her newfound information at the guild meeting after Ral Zarek told the truth about his defeat. The Wanderer also revealed that she could no longer sense the Planar Bridge technology which indicated that Tezzeret may have intended to be followed.[1]

The Wanderer was briefly present on Ikoria, where Vivien Reid saw her cut down a monster before planeswalking away.[4]