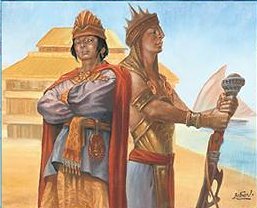 Merchants of the Talas. Art by Lubov.

The Talas is a region on the west coast of Caliman, inhabited by dark-skinned humans who ply the seas and skies as merchants, pirates, and wizards. They dominate the seas and islands with their steam-powered galleons and airships, and control some inland timber towns and port towns. The folk of the Talas harvest featherwood from the elven forests of Norwood.

The Talas pirates and their cannons still exist in post-apocalyptic Dominaria.[1] They even raided Tolaria West.[2]