The towering Spine of Corondor is a mountain chain on the Dominarian continent of Corondor, that runs a thousand miles from from Minorad to the plains of Casindral.[1]

A dozen stalwart races are said to reside within its fiery mantle. Chief among them are the ever warring tribes of kobolds with their orc vassals, fierce ogres, and mighty giants. It is said that if the inhabitants of the Spine could overcome their hatred of each other, they could sweep over Corondor.

The mountain of Trovash is the southernmost part of the Spine. The historic battle field Battle Rising forms a gateway through the Spine. 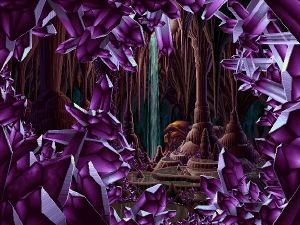 During the Brothers' War artifacts had been brought to Corondor from Terisiare and were hidden in the caves of Trovash.[1] Jared Carthalion and Kristina of the Woods found a mining tool there, used by Mishra's forces during the war.[2]