From MTG Wiki
(Redirected from The Monarch)
Jump to: navigation, search 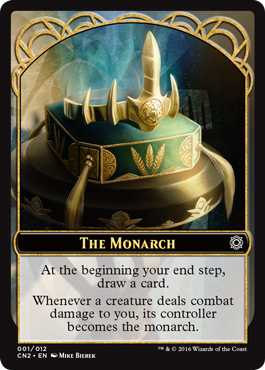 Only one player at a time can be the monarch. The monarch has the following ability: "At the beginning of the monarch's end step, draw a card." In addition, several cards in Conspiracy: Take the Crown get better or have an additional ability if you're the monarch.

A special marker was included in booster packs of Conspiracy: Take the Crown that can be used to indicate which player is the Monarch. This can be placed on the battlefield or in the command zone, but is not a token (because it doesn't represent a permanent) or emblem but rather a status.

Monarch was inspired by the "Edge" mechanic, a similar mechanic from Vampire: the Eternal Struggle (another trading card game created by Richard Garfield and at one point published by Wizards of the Coast).[6] A similar mechanic had also been considered for Ixalan.[7]

At the start of the game, no player is the monarch. The monarch status only enters the game through a card's ability that causes a player to become the monarch.

Once a player is the monarch, they remain the monarch until another player's creature deals combat damage to them, at which point that creature's controller becomes the new monarch.