The Domains is rather vaguely-defined geographical region on Dominaria, which includes the continent of Aerona, and the archipelago to its east.[1] It is separated from Corondor by the Western Sea. The Domains is the home of many Dominaria's most famous cultures, including Benalia, Llanowar, Verdura, Keld, Hurloon, and the White Knights.

Locations in the Domains[edit | edit source] 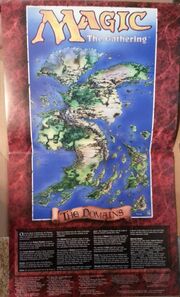 A map of The Domains included in a 1997 wall calendar.

The Seas of the Domains[edit | edit source]

The Domains also contain several seas which are notorious for the inconsistencies in descriptions of different geographers. While on one map the Voda Sea is very small and contains only several isles, on another map it stretches so far it contains almost all the eastern Spice Isles. The latter is also depicted on the map that is considered to be the most accurate.[3][4] Another example is the Honeyed Sea which is (mistakenly) located east of Avenant on one map, but south of the Green Lands on another. This waterbody is absent on the mentioned map.