From MTG Wiki
(Redirected from Temur)
Jump to: navigation, search 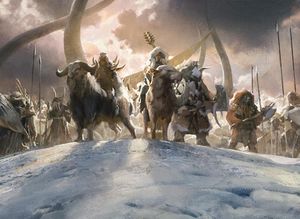 One of the five Clans of Tarkir, the Temur Frontier admires the ancient dragons' aspect of savagery.[1] Their color wedge is

The Temur are fierce, rugged survivors that live in the harsh arctic environments of Tarkir and have constructed many of their structures out of the bones of fallen dragons.[4] Embodying the aspect of savagery, the Temur are often forced to fight as feral animals would, doing anything they can to survive.[5] Most of the year they hunt in the inhospitable Qal Sisma mountains.[6] Shu Yun regarded them as alerters to the other Clans of threats and developments that had yet to take form.[7]

Family is central to Temur thinking, almost as important as it is as among the Abzan. The bonds within a family group and to the family leader are much stronger than those to an external leader. Each family group sees the others as siblings within the community and supports them in the same way (although one's own family always comes first). The First Father or Mother of the clan is considered to be the parent of all the families, and they owe fealty to the khan as they would their own parents. Separate from that title is the rank of dragonclaw, signifying the best fighter of the Clan. Both positions can be held conjointly. The Hunt Caller has the duty to ensure that all families are fed.

Every adult member of the clan is a formidable fighter, and children learn weapon-play early in life. Even a nursing mother is a ferocious opponent in battle, perhaps even more so than others since she carries her infant with her and will fight ceaselessly to protect it. Shamans are seen as living links to the ancestors who are frozen in time. They are referred to as whisperers and have a special relation to time. They are led by the One Who Whispers Twice, who travels with the Dragonclaw to advise them. The art of Whispering was taught by Ugin to the ancestors of the tribe.[8]

In both timelines of Tarkir, the Temur were instrumental to the development of the plane's history. Namely, their khan, Yasova, was responsible for aiding Bolas in murdering Ugin, resulting in the local extinction of dragons in the old timeline.

In the new timeline, her efforts instead caused the dragon to fall into a slumber, causing the opposite effect and creating more dragons. After a last ditch effort to save her clan from the dragons by meeting with the other khans failed, Yasova was forced to try to appeal to Atarka, the brood leader of the dragons infesting Temur territory, and partly succeeded, feeding her and preventing thus her wrath.[7]

Later, Atarka initiated a purge of the Clan's shamans, fearing their elemental magic, stripping the Temur largely of their identity. The remaining members were reorganized into a new Clan that was solely dedicated to feed her. Several shamans, however, managed to survive the purge and pass the old ways on in secret.[9]

The Temur mechanic is Ferocious, an ability that gives the player an advantage if they control a creature with power 4 or greater.

Relationship with the Dragons[edit | edit source]

The Temur often clashed with the brood of Atarka, who were main concurrents for the limited food supply. The Temur established their outposts in deep caves with icy overhangs, and their shamans weave elemental magic to enhance these shelters with masses of spikes that discourage airborne attack. Temur dragon-fighters preferred to face dragons in solo combat, using their prodigious strength and stubbornness to wrestle and subdue their adversaries.[11]

The Temur Frontier is loosely based on shamanistic Siberian culture.[12]