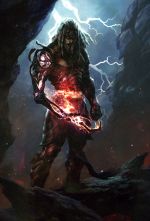 Tezzeret is a human planeswalker, born in Tidehollow on the shard of Esper (Alara). He is a henchman of Nicol Bolas.

Tezzeret wields blue magic. His specialty is artifice: spells that forge artifacts, manipulate artifacts, and even bring artifacts to life, creating huge constructs from mere scrap bits of metal. He also is proficient in mental magic. Like all Esperites, he has part of his body "enhanced" by the magical alloy etherium, part of an overarching planar venture to create perfection of both body and mind.

Tezzeret has a very explosive temper, with frequent violent outbursts, and an unscrupulous nature. His primal driving force is a lust for power and knowledge; and, he is prone to punish people who failed him in severe and often brutal ways if he needs them in the future, or kill them outright if he does not need them. He was last seen on Kaladesh, where he had assumed the high-ranking post of Head Judge at the Inventors' Fair of the Ghirapur Consulate. After the finale of the Fair he stole all presented inventions (among others a small planar portal) and abducted the inventors.