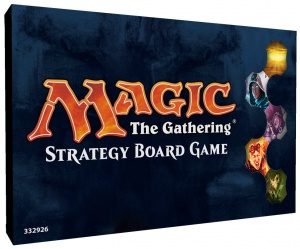 Magic: The Gathering Strategy Board Game is a tactical miniatures wargame for 2-­5 players, inspired by the Magic: The Gathering card game, taking place on Shandalar. It is co-­developed by Wizards of the Coast and Hasbro; one of the designers is Ethan Fleischer. The final name of the game will be announced at a later date. The game will be globally available in Fall 2015 (to be released at Gen Con).

The Magic: The Gathering Strategy Board Game is a standalone experience from the TCG. It is not played with Magic: The Gathering cards, but it pulls directly from Magic lore and includes references to many classic cards. The players play one of five planeswalkers, they summon armies, cast game-changing spells, and try to outmaneuver their foes on the battlefield. The players customize the battlefield by designing the map, placing terrain and powerful glyphs. Each game will include the same five highly detailed, fully painted Planeswalker mini-figures: Chandra Nalaar, Jace Beleren, Nissa Revane, Liliana Vess and a character that will be revealed at a later date.

It appears the game is using many of the same tiles and mechanics as Heroscape. Heroscape was an expandable turn-based miniature wargaming system originally manufactured by Milton Bradley Company, and later by Wizards of the Coast itself, both subsidiaries of Hasbro. After taking over Heroscape, Wizards of the Coast issued new products with a Dungeons and Dragons theme. The game was discontinued by Hasbro in November 2010. The game is often noted and lauded by fans for the relatively high production quality of the game materials, in particular the pre-painted miniature figures as well as its interchangeable and variable landscape system.