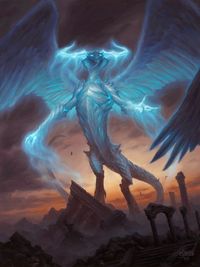 Ugin is a Spirit Dragon planeswalker, native to the plane of Tarkir. His magic, the transmutation of energy into matter, is responsible for the Elemental Dragon storms that once raged through the plane, giving birth to its Dragons.

Ugin was the mastermind of the trio of planeswalkers, including Sorin Markov and Nahiri, that lured the Eldrazi to Zendikar to imprison them within the Eye of Ugin that was named after him. Over the course of 40 years, the planeswalkers prepared Ugin's plans, creating a massive network of stones known as hedrons, powered by leylines and coded by draconic runes. When the Eldrazi finally arrived on Zendikar, Ugin's part was to combat the Eldrazi with his own colorless magic, the magical key to unlocking the Eye.

Ages after the Eldrazi were sealed, another conflict found the spirit dragon. The elder dragon Nicol Bolas tracked down Ugin and the two planeswalkers waged a titanic battle across the skies of Tarkir. Eventually Bolas was the victor and dug deep into Ugin's mind for information about the Eldrazi and their prison. His purpose accomplished, Bolas departed, leaving the grievously wounded Ugin to die. However dead, the dragon's spirit had not departed, and seemed to haunt the Warrior Shaman Sarkhan Vol.

Sarkhan Vol was drawn back to his homeplane of Tarkir by the whisperings of Ugin's spirit in his head. While there, he was able to travel back in time 1,280 years using Ugin's Nexus to when Ugin fought Nicol Bolas. Using a shard of a hedron containing Ugin's life force, Sarkhan created the Crucible of the Spirit Dragon to save Ugin and thereby changed the fate of the entire plane.