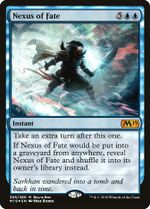 Initially the promos were foil cards with alternate art, bearing the five mana symbols arranged in a circle as a watermark. Starting with Dominaria, they were unique cards that are part of the relevant set, but can't be found in booster packs. This change was heavily criticized. A comparison was made with the exclusive release of Nalathni Dragon in 1994, after which Wizards of the Coast had vouched to make all cards available one way or another for the main public.

This controversy only magnified with the release of Core Set 2019 and Nexus of Fate; while Firesong and Sunspeaker was of a medium power level and likely not required for any more than one copy per player as a Commander, Nexus of Fate was radically different. The ability to take another turn is extremely powerful, and the in-built recursion incentivizes players to run a full playset; ultimately, Pro Tour 25th Anniversary had several successful pilots of Turbo-Fog variants with playsets of Nexus of Fate, resulting in a massive spike of the card price. Its unfun gameplay patterns also led to a ban in Arena Standard.