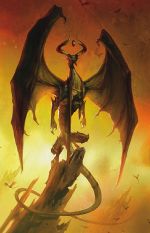 The planeswalker Nicol Bolas or the Forever Serpent is the most powerful of the five Elder Dragons to have survived the Elder Dragon War. He is considered one of the most powerful planeswalkers of the Multiverse and at 25,000 years old, possibly the oldest being alive. Bolas' hallmark is his touch, an inborn ability that causes a mind shattering effect with the slightest caress. It makes coherent thought nearly impossible.

Liliana of the Gatewatch believes the plane Amonkhet was created by Nicol Bolas before the Mending, when the planeswalker would still have had the power to do so.

After the Mending, Bolas was unable to retain much of arcane knowledge. He fled to the plane of Alara where he began machinations while dwelling in the Shard of Grixis. He prepared to take advantage of the coming Conflux to regain his power, and started to manipulate certain individuals and organizations on the multiple shards to create an environment rife with tension and ready for war. During a confrontation in the maelstrom, his plans were thwarted by Ajani Goldmane.