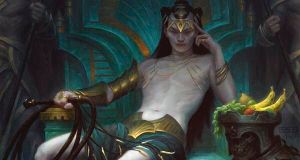 Tasigur was a khan in the past of Tarkir. During his time, humans still ruled the Sultai Brood

Tasigur was a young, pampered heir to the Sultai fortune who indulged in cruel pleasures and spared no thought for ruling his realm. He was usually carried about the palace on an ornate platform borne by zombies. Tasigur wore elaborate golden adornments and carried a long, sharp-tipped whip, which he used on others when he felt displeased or simply bored. He especially enjoyed tormenting enemies by sending their own undead kin against them.

Due to his disrespect of a Rakshasa named Khudal, the Sultai lost the ability to control their undead minions and were also abandoned by the naga for several months.[1] After constant attacks by Jeskai and Abzan forces followed by dragon sieges, Tasigur attempted to gift the dragon progenitor Silumgar with his jade throne.

In the new timeline, Tasigur led the dragon's brood into a meeting that the khans held as a last ditch resort to defeat the reptilian beasts, resulting in Silumgar's and Ojutai's dragons winning over the khans and clans. Tasigur was rewarded for this by becoming Silumgar's personal slave, his trophy of war.[2] His preserved corpse is later seen as part of Silumgar's necklace.[3]