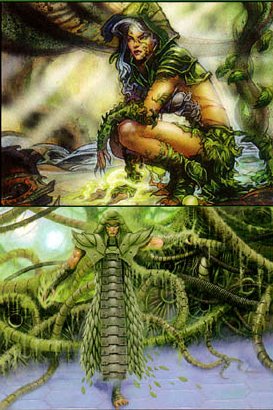 The Sylvok are a reclusive human ethnic group that live in the Tangle on the plane of Mirrodin, sometimes interacting with the elves there.[1] The Sylvok practice a druidic religion in which most if not all of their people take part. They seem to have a hunter-gatherer culture; their needs are provided in part by the Tangle itself, which seems to know where to grow gelfruit to feed the Sylvok. Much less is known about the Sylvok than the other humans of Mirrodin.

The Sylvok are of medium height and build, with fair skin, sometimes with a greenish tinge. Their skin is studded or laced with intricate brown or green copper. They often wear long coats of metallic armor.

With the arrival of New Phyrexia, the Sylvok were ill prepared against the invading monstrosities. The vast majority were either destroyed or compleated, with only Melira and probably Kessla surviving without corruption.