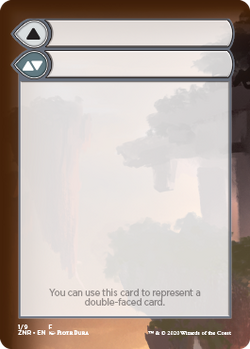 A substitute card is an optional substitute for a double-faced card or meld cards, providing the standard missing card back these cards are naturally lacking.[1]

Substitute cards were introduced as checklist cards with Innistrad in 2011, the name change "substitute cards" happened in 2020 with Zendikar Rising.[2]

Checklist had a list of all double-faced cards (common-uncommon/rare-mythic in Shadows over Innistrad) in the respective set on one side and the typical Magic card back on the other side. In Ixalan and Rivals of Ixalan boosters, double-faced cards (almost) always appear with a checklist card.[3]

An improved substitute card, called a helper card, was introduced with Zendikar Rising.[4][5] On the front side you can write, the back side is a regular card back. The early checklist cards may be exchanged for a helper card when playing the older douuble faced cards. Write down the name of the card you're representing, along with any other information visible on the actual card. You can't use helper cards to jot down sideboarding notes, or anything not found on the card. During the game, if the card is in a public zone, swap in the real card. If it's in a hidden zone, use the helper card.

Substitute Card
A game supplement with a Magic card back that can be used to represent a double-faced card or meld card. See rule 713, “Substitute Cards.”