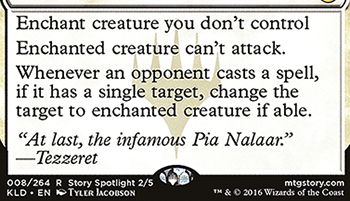 The lower half of the card Captured by the Consulate, showing the forked planeswalker symbol behind the text, and the Story Spotlight designation and URL below the text box.

Story Spotlights are a small group of cards found in each expansion set from Kaladesh onward. They are marked by the words "Story Spotlight" (initially followed by a sequence number) below the text box.

When collected and read in order, Story Spotlights convey the broad strokes of that set's storyline. Each such card also shows the web address for Magic Story, mtgstory.com, where the complete narrative can be read.[1][2][3]

The story has been told in a variety of media, including novels, comic books, webcomics, and ebooks. Currently, new chapters are published weekly in the online Magic Story column, which is more popular and more widely read than all previous models of storytelling.[6] However, many players remain unfamiliar with the story. Story Spotlights were created to make the story more visible, and draw less enfranchised players to the online column.[7]

Story Spotlights are actually only the latest of several iterations of showing the story on cards. Tempest card art depicted the story nearly scene-for-scene, but the cards lacked any explicit order.[8] At some point afterwards, a policy was instituted barring cards from showing key story events.[9] More recently, that policy was dropped, and a concerted effort was made to convey major plot points on cards.[10]

Prior to their printing, the name "Pivotal Moments" was considered for the Story Spotlight cards. However, it was changed for being inadequately self-explanatory.[11]

Because Core Set 2019 was filling in story and was not part of the current storyline, it had no Story Spotlights.[12]

Starting with Guilds of Ravnica, the story spotlight cards no longer tell you the order they occur in. This was done to give away less of the story when the set was previewed.[13][14]

As of War of the Spark the Story Spotlights no longer featured the planeswalker symbol watermark.