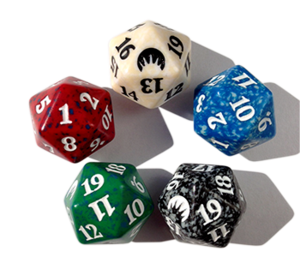 A life counter is a device to keep track of life totals. 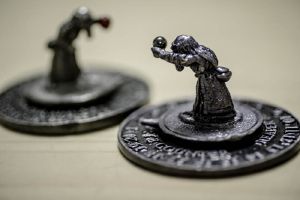 Scrye magazine sold a series of pewter life counters produced by Reaper Miniatures beginning in 1994. The counters were made in two pieces. The 2 inch base was etched with the numbers 1-20 along the edge. A rotating piece with an indicator arrow was put on top, and featured artwork or miniature figure. These came in several colors and styles and could be painted by the owner just like similar miniatures. These counters were not official Magic products, but were very popular with players of the time. 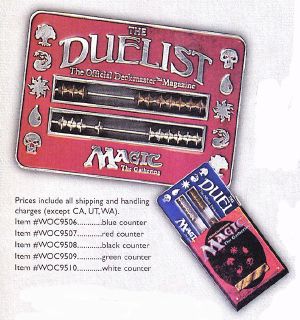 Sold by The Duelist since 1995, these sturdy, finely crafted pewter counters let you mark off lifes with brass- and silver-plated beads. They were avalaible in the 5 mana colors. The counter fits in a Magic deck box.[1] 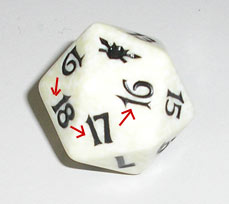 Spindown life counter illustrating how numbers are sequentially next to each other, arrows do not appear on the counter itself.

A spindown life counter is a 20 sided die that is designed for the express purpose of keeping track of life totals. Its sides are in a sequence such that adjacent numbers are next to each other, facilitating the change of life total and avoiding any complications with finding the desired life total. This is different from a standard 20-sided die, on which the numbers that are opposite of each other on the die add up to 21 (1 is opposite from 20, 2 is opposite from 19, and so on), as is traditional for dice in general.

The "20" on a spindown life counter is replaced with an expansion symbol (or in the case of core sets the appropriate number). 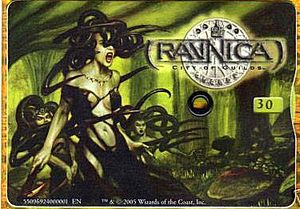 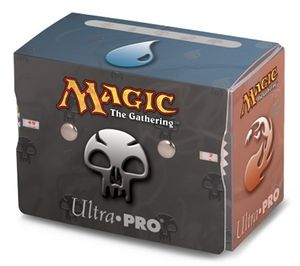 In Coldsnap[2] and the Ravnica block, Wizards chose to try a different approach. Instead of dice, a plastic life counter with a circle spinner that had numbers going from 1 to 30 was included in fat packs for the block. These life counters were not unlike those that were provided on Magic: The Gathering-branded Ultra Pro deck boxes.

Some odd-shaped circle spinners were provided for Ninth Edition (an angel) and Unhinged (an eight ball).[3] 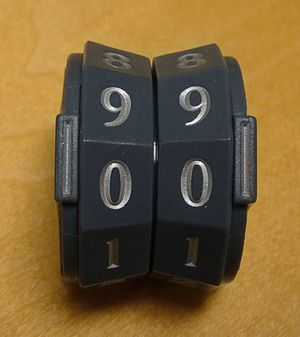 Commander's Arsenal provided a doubled wheeled counter that goes up to 99 life.

These were also included in Archenemy: Nicol Bolas and Commander Anthology.

The life wheel is a card with a wheel embedded into it to help you keep score. It was introduced with the Throne of Eldraine Brawl decks.[4][5]