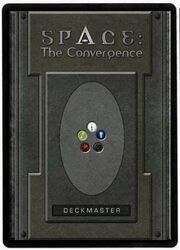 Space: The Convergence is an imaginary trading card game dedicated to recreating titanic battles between powerful warlords vying for control of distant planets. It was thought up by Kelly Digges in a "what if" scenario, where Richard Garfield would have chosen Science Fiction instead of Fantasy for his first game published by Wizards of the Coast.[1]

In Space, you take on the role of an interplanetary warlord harnessing powerful energy (called psi) to teleport soldiers, creatures, and machines - units - to fight for you. You and your opponent each start the game with 20 control, and it's your goal to reduce your opponent to zero control - winning the game.

There are five types of psi, known as alignments. Psi is drawn from resources, and each type of psi is associated with one of the five types of standard resource. Moreover, each alignment has a particular philosophy and outlook that colors its view of the world and its approach to the game.

Each type of psi originates from a different planet in the galactic core, spread outward from there by warlords eager to harness its power. The only means of quickly traversing interstellar distances is the spacefold (or teleport), and psi is necessary for spacefold technology to function.

When a certain type of psi is used to teleport something, it warps and changes that thing - be it a piece of technology, an animal, or a person. Only certain types of complex electronics can be teleported without being altered somehow.

Entire worlds are distorted by psi, coming to resemble the world where that alignment of psi originates. There are hundreds of thousands of worlds spread throughout the galaxy, countless warlords struggling to dominate them - and only five types of psi.