A set in Magic: The Gathering is a pool of cards released together and designed for the same play environment. Cards in a set can be obtained either randomly through booster packs, or in box sets that have a fixed selection of cards. An expansion symbol and, more recently, a three-character abbreviation is printed on each card to identify the set it belongs to.[1] 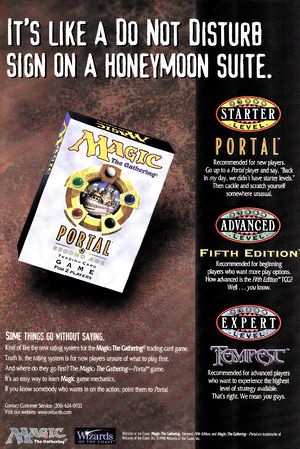 A rating system for complexity in the line of sets was introduced with Fifth Edition, Tempest and Portal Second Age, (1997–1998). These ratings stopped appearing on packaging with the release of Lorwyn (2007).

Expansions are sets that feature the latest Standard-legal cards and mechanics. The most recently released expansions form a large part of the game's Constructed and Limited environments. Each expansion has a theme running through the gameplay and flavor of its cards. Until 2018, expansions were organized into blocks according to their theme and release date. The newest expansion is Theros Beyond Death.

Expansions are the focal point of Magic, especially its primary gameplay format, Standard. Standard annually rotates out older sets in favor of newer ones, putting less emphasis on legacy cards. Since core sets were briefly discontinued in 2015, expansion sets currently make up most of the card pool in Standard.

For a long time, Magic expansions used to be grouped into blocks, which carried an overarching theme across two or three sets. A large expansion established each block's setting and mechanics, followed by one or two set(s) that developed on the block's themes.[2] These are abandoned under the current system.

The game's first expansions, from Arabian Nights (1993) to Homelands (1995), were independent releases as they came out before the introduction of blocks. Mirage block established a convention of making expansions in blocks of three, one block per year. This practice would remain the default for Magic from 1996-2014. Exceptions were Coldsnap (2006), an extra summer expansion that was retconned into Ice Age block; and Lorwyn–Shadowmoor block (2007–08), two mini-blocks of two sets apiece.[5]

The latter's structure was adopted into the "Two-Block Paradigm," the block structure effective since Magic Origins (2015). Under this system, Wizards eliminated the core set to allow them to make four expansion sets each year. These were divided into two blocks annually: one including the autumn and winter sets, and a second including the spring and summer sets.[6]

The Two-Block Paradigm proved to be unsuccessful in some cases. The demise of the block structure was announced by Rosewater on June 12, 2017.[7] From 2018 on, three large standalone sets are to be released each year (spring, autumn and winter), supplemented by a revamped Core Set in the summer. This is called the Three-and-One Model.

A large expansion is one with more than 240 cards, while a small expansion has 200 or fewer. The typical block structure begins with a large set, followed by small set(s) in a supporting role. However, the second or third set can also grow into a large set as needed by R&D.[note 1][5] Historically (under the three-set block formula) this has been due to a need for the third set to expand on the block's existing themes while also having its own unique flavor and mechanics.[2][6]

The exact number of cards in a set has varied widely over the years, especially those from before the block structure was well defined. Mirage block through Onslaught block established a convention of 350 cards in the first set, and 143 cards in each of the second and third sets. This changed with Mirrodin block, which reduced the size difference between the large and small expansions by shifting some uncommons and rares from the former into the latter.[8] The new custom (306 large, 165 small) continued until Coldsnap.

Time Spiral block increased the size of its expansions to accommodate its timeshifted cards. The Standard card pool consisting of Time Spiral, Lorwyn, and Shadowmoor blocks was the largest in Magic history. Following this, feedback regarding the number of cards printed annually caused Wizards to cut back the size of sets.[9][10]

Beginning in the fall of 2015, there were two large expansions released each year, one in the fall and one in the spring (the Two-Block Paradigm).[6] The Standard play format rotated with the release of each large expansion, rather than just once a year as had been the case since 1997. In this new structure, core sets were eliminated. After the introduction of the Two-Block Paradigm, the second set of a two-expansion block would be usually small (but not always). To facilitate the new draft structure (2 boosters of the second set / 1 of the first set) the average size for a small expansion went up to around 184.[11][12][13]

Small expansions were abandoned with the introduction of the Three-and-One Model.[7] This means that Rivals of Ixalan was the last small expansion.

Preconstructed theme decks are released in fixed box sets. They were later replaced with planeswalker decks.[14]

A standalone set is a set that is designed to be played by itself. Ice Age, Mirage and Tempest were all marketed as such.[15] The concept became outdated when the block structure was improved upon, but was reinvented with the Three-and-One Model.

Core sets form the base set of cards for tournament play and rotations.[16] After the Limited Edition, all core sets through Tenth Edition consisted solely of reprinted cards; as of Magic 2010 they feature new cards beside reprints. Following Magic Origins, the core sets were discontinued to allow room for four expansions annually under the Two-Block Paradigm.[17] This was reversed with the introduction of the Three-and-One Model.[7]

Supplemental sets are products not intended for Standard environments. They usually introduce new casual game variants, early on often with oversized cards. Some were sold in box sets, others in booster packs. These take the "(Draft) Innovation Product" slot in Wizards of the Coast's annual release schedule.[18] One of the current design constraints for innovation products is that it can be sold in a booster pack.[19]

Other examples of an innovation set:

Un-sets (Unglued, Unhinged, Unsanctioned, and Unstable) are self-parody sets that are sold in booster packs, and are silver-bordered to denote they are not tournament-legal. Championed by Mark Rosewater, they are themed around mechanics that would be impossible to print in a normal expansion.[20][21] Although these set are targeted to the casual crowd, they also may contain cards specifically designed with Cube and Commander in mind, for playgroups who are okay with using them.

Annex sets are a special line of products started with Amonkhet block. The idea is that they are "complete experiences in a box" released after the set they are associated with.[22] R&D has decided to do Annex products when they make sense instead of forcing them for every set.[23]

Portal and Portal Second Age were entry-level products that used a simplified form of Magic. Portal Three Kingdoms was an adaptation of the series for the Asian market, based on the Romance of the Three Kingdoms. Starter was another attempt, after the Portal series, to ease new players into the game.

The following is a chronological list of all Magic: The Gathering expansions and sets released thus far.