The skyship Weatherlight was a great ship capable of moving from plane to plane. This ship was designed by Urza as one of the main parts of the Legacy and proved to be a key part in the efforts to save Dominaria from the Phyrexian invaders.

The Weatherlight was invented by Urza in the Tolarian Academy and was built out of Thran metal and the Weatherseed, the seed of the oldest magnigoth tree of Yavimaya. The Thran metal rack was forged in Shiv by the viashino and the seed was a present to Dominaria from Multani. Its main power source came from a powerstone that had been infused with the white mana from Serra's Realm before it collapsed.

The 300-foot ship carried a crew of approximately 40, with most of the crewmembers assigned to tending the ship's massive and complex engines. Staterooms and officer's quarters were conjoined around the mast room on the main deck level, near the stern. Two decks in the forecastle split the complement of able-bodied sailors between them and doubled as additional storage space for ship's goods. Those without seniority among the crew slept in the cargo hold, in a series of secured hammocks.

Manipulation of the sails was the primary way the Weatherlight steered at low velocities. At higher speeds the sails converted to airfoils, warping to allow steering, in addition to the vane that split the ship's exhaust. The Weatherlight's engine provided the main power for the vessel. Its power plant, the core of which is a massive crystal that transformed mana into fuel, created the levitation field and enabled planar travel. Two rudders were fitted into the stern, flanking the exhaust manifold and conforming to the curve of the hull.

The Weatherlight was capable of attaining speeds approaching 110 mph in a straight line, 40 miles an hour in full reverse. A "storm shield" created by the ship's engine and generated by the ship's magically powered lights offered some protection from the elements on the ship's deck, but at higher speeds, this area was no place to be. Under most circumstances its sails were deployed in wind-ship fashion, assisting in the forward momentum. 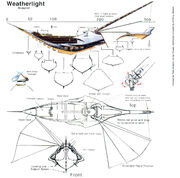 Urza set out to breed the perfect human for his perfect ship. He first put humans into his fast time zones, but this ended up in almost fatal mental complications such as complete and utter insanity. He eventually figured out that he must breed the generations in real-time, and not in slow or fast time zones. He began experiments on the Capashen Clan of Benalia, which eventually resulted in the birth of Gerrard Capashen.

In an effort to spare the Weatherlight from the attentions of Phyrexia, Urza entrusted the ship in the hands of a wealthy Zhalfirin family. Sisay inherited the ship from her family after they were mysteriously killed by the Lord of the Wastes. Gerrard eventually joined the crew of the ship and was later instrumental in rescuing Sisay from Rath. During this time many pieces of the Legacy were integrated into Weatherlight.

Following the kidnapping of Captain Sisay, Weatherlight planeshifted to Rath, where it was ambushed by the Predator, which attached grappling lines and boarded her. In the ensuing battle, Predator's crew took Karn, Tahngarth and the Legacy artifacts hostage, although their main prize—Gerrard Capashen—was knocked overboard into the Skyshroud Forest.

Predator and Weatherlight dueled again following the Weatherlight crew's costly but successful rescue mission to the Stronghold. This time Weatherlight was racing to the planar portal being kept open by Ertai and therefore Predator lacked the benefit of surprise and had barely enough speed to keep up with the smaller vessel. As a result, the battle instead compared the weaponry of the two vessels, with Weatherlight's smaller, more maneuverable design and better-trained crew giving it the edge against its bulkier but better-armed opponent. Weatherlight just managed to get to the portal and escape her pursuer, with both vessels sustaining major damage.

On Mercadia, the ship was upgraded with the Power Matrix and Bones of Ramos. It was during this time that Weatherlight was also instrumental in freeing the peoples of Mercadia from their Phyrexian oppressors.

During the Phyrexian Invasion, Weatherlight was ever at the center of Urza's plans for the defense of Dominaria. The ship was destroyed by the Primeval Crosis, only to be reborn as a completely sentient being. The ship was destroyed a final time over the skies of Urborg while defending Dominaria from the arrival of Yawgmoth. It is possible that part of Weatherlight lives on inside the planeswalker Karn.

Sixty years after the Mending, Jhoira led an expedition off the coast of Urborg to raise the remains of the Weatherlight. Using a diving boat and the aid of Merfolk, she located it deep beneath the sea.[1] All that was left was the skyship's Thran metal skeleton, nearly two hundred feet long, and the bulky coils of its engines.[2] The engines also contained its original powerstone, created by Urza. Tiana was able to restart it. The rest of the hull and interior had decayed away or been destroyed in the battle that had sent it to the bottom of the sea. Jhoira used a new sentient hull seed she had obtained from Molimo to restore the gracefully curved hull and the interior decks.[3] Her crew added a stern mast, wings, railings, ports and all other necessities. The bridge was raised and suspended across the stern of the ship, with big windows that stretched from one wall to the other.

Unlike its earlier version, this new Weatherlight didn't have planeshifting abilities.[4][5] All existing planar travel tech had stopped working with the Mending.[6]