From MTG Wiki
(Redirected from Shyft)
Jump to: navigation, search

Shapeshifters are a loosely-defined group of beings capable of assuming other shape and forms, often imitating other beings. They can be found in all colors of mana, but predominately in blue. The first creature to bear the type was Unstable Shapeshifter in Tempest. Vesuvan Doppelganger and Clone from Alpha, and Shapeshifter from Antiquities were later issued errata to become Shapeshifters, as well.

Shyfts are mysterious beings that appeared on Terisiare during the Ice Age. Gerda Äagesdotter is supposed to have studied them.

The dopplegangers and shapeshifters of the isle of Vesuva are as mysterious as they are notorious. The magical doubles of visitors to the island have to tread cautiously as their doubles are murderously envious of the "originals."

Innistrad is home to various shapeshifters (like the Evil Twin and the Identity Thief) whose prime targets are humans. They assume their form to mix into human society, often with malicious purpose.

Protean Raiders can be found among the pirates of the Brazen Coalition, although it is unknown if any pirates are actively aware of their presence.

It is likely that they were natives of Torrezon displaced by the ascent of the Legion of Dusk.

On Kamigawa, Shape Stealers are spirits of the Kakuriyo who manifest in the physical world bearing the shape of whatever is nearby. 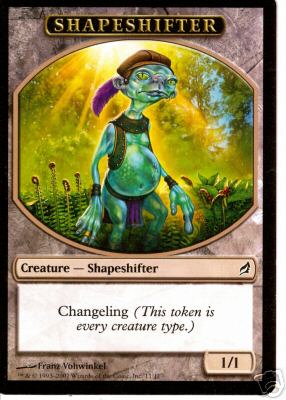 Changelings are relatively harmless, semi-sentient creatures native to Lorwyn.[1][2][3] They can be difficult to find, but they are quite distinctive when they are found, given their appearance. A changeling's standard appearance is that of a squat, greenish-blue humanoid with slightly scaly skin, large eyes, a translucent body, and frequently a forked tail. Their most noteworthy attribute is their involuntary ability to assume the shapes and characteristics of the creatures around them. This occurs no matter what type of creature is around, to their pleasure or annoyance, and sometimes it can result some truly dramatic changes, ex. Changeling Titan. It is believed they reproduce in the secret cave of Velis Vel.

After the Great Aurora, the changelings were transformed into Shadowmoor's mimics, aggressive and vicious creatures that attack in packs while taking forms that resemble warped reflections of their victims.

Found only in Shadowmoor, pucas are horse-headed shapeshifters whose moods swing wildly from mischief to malice.[4][5] They are amphibious and are particularly common near flooded swamps, mountain streams, and waterfalls.

Mechanical duplicants are common across the face of Mirrodin, taking the form of the living or dead.

Volrath's many experiments on Rath bore many results that took after their master.

Lupul is a name derived from the Old Ravi word for "lurker". Found solely in Ravnica, Lupuls are shapeshifters that follow the vampire Szadek. In their natural forms, they have the form of a mass of blue-white worms that can move as a single creature with surprising speed and dexterity. In this form they are similar to insects and as such those akin to the bugs can communicate with them and to some extent control them, one such example is Jarad the devkarin hunter. They shapeshift by consuming others, and once they have consumed a living thing in their natural form, they can later change into that creature's form whenever they choose. Lupuls are extremely stealthy and nearly impossible to catch.

Thought to have been defeated centuries before the Decamillennial, they resurfaced under Szadek's commands, until his control was disrupted by Jarad. They resurfaced again years later impersonating the nephilims of yore. In the game, Lupuls are represented by the card Mindleech Mass.

Though much harder to tell their natural shape, Dimir agents such as the Dimir Doppelganger or Lazav use their constantly shifting physiology to infiltrate places and organizations.

Lorwyn block featured six tribal Shapeshifter cards with changeling, which could be fetched by all "Harbinger" cards or made cheaper by all "Banneret" cards: