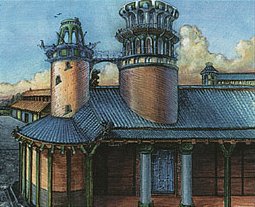 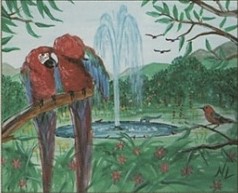 Onella is the capitol city of the Citizenship of Aysen, a Serra worshiping state on the plane of Ulgrotha. It was named after the first Abbot Hazduhr, chosen by Serra herself.

Under the Abbot authority, Abbey Matrons wander the streets, enforcing laws. Thrice a year, bureaucrats from all over Aysen travel to Onella to discuss important issues. Onella is a place full of shops and homes, businesses and small temples, and even a sort-of-functioning clock tower with ten divisions to the hour instead of twelve. However, there is a lot of bureaucracy in Onella, and a lot of people, fed up with this, have traveled to the Great Wood, founding new towns where they can live far away from the rigid codes and laws of the capitol.[1]

In the past, it was tradition that, when the Abbot died, Serra would walk among the peoples of Onella and choose a new spiritual and cultural leader from the crowd. However, after Feroz's death, Serra wandered the streets of Onella, and tried to save a man in the way of a heavy cart wheeling out of control, but failed. Baron Sengir appeared and convinced Serra to leave Ulgrotha altogether.[2]

The Aysen Abbey was built in Onella under the leadership of its Abbot, around 3190 AR. The Abbey is ruled by the Abbot, while the matrons are stationed there to serve the city.

The gargoyles were Serra's gift to the city of Onella. They protect the city from goblin raids, and make an excellent police force in times of peace. If one of these creatures witnesses a crime, it will ceaselessly follow the perpetrator until the person turns himself in. They are also slightly empathic, and can easily discern individuals who suffer mental instability, guilt, anger or sadness. They live on the parapets of the older buildings in Onella, usually around Aysen Abbey. The Abbey Gargoyles are seen by the populous of Onella as one of the few signs that Serra still watches and protects them, even though she has been gone for nearly twenty years. The creatures are watched almost religiously by the populous, and are thought of as walking miracles.[1]

The Serra Aviary was built as a temple to Serra, and a place for her to visit. It is a place of peace and tranquility. Open to the sky, it is tended to by the young men and women of Onella (especially by those Initiates who are seeking to become Matrons), and inhabited by many of the common small birds, pigeons and crows of Onella. There aren't cages, and all operations are watched over by the Falconer. The Mesa Falcons and other wild birds of the Homelands will occasionally visit, and the Falconer will speak with all of them if she gets a chance.[1]