Serra was a human female planeswalker from the ancient days of the planes, with an affinity for angels, born on an undisclosed plane. She was immensely powerful, enough to create her own plane - Serra's Realm, which she populated with her Serra Angels. The Church of Serra was founded on Dominaria in her honor, worshipping the planeswalker as a goddess.

When Xantcha visited Serra's Realm, after having seen angels and archangels, she had expected a tall, slender, and remote woman. However, Serra could have walked through any man-made village without attracting a second glance. Her face, though pleasant, was plain, and she had the sturdy silhouette of a woman who'd borne children and done many a hard day's work. She was also surrounded by a gently flickering white nimbus.[1]

Serra was centered in white mana.

Thousands of years ago, the planeswalker first visited Dominaria and created her first angels.[2]

Church of Serra Founded In Sheoltun[edit] 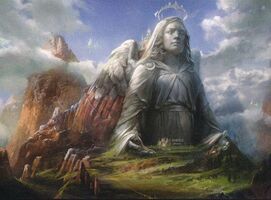 The Temple of Serra at Epityr. Art by Christine Choi.

The Church of Serra can be traced back to the days of the Sheoltun Empire, Benalia's forerunner. Here, she was revered as a goddess and a temple was built in her honor in Epityr.[3] The enormous statue that is part of the temple depicts her with wings.

She created her own heavenly plane, Serra's Realm, formed primarily with white mana and populated by her angels and human worshippers. Her worldview, beliefs, and wisdom are chronicled in the Song of All.[4]

Serra's personal realm came to an end when Urza appeared, wounded from an attack by Phyrexians. He spent years there recovering and left the plane in peace. However, the Phyrexians attacked shortly thereafter, having tracked Urza to her realm, killing many of Serra's subjects. Worse still, the black mana essence of the Phyrexians tainted Serra's Realm so badly that Serra herself could no longer stand to stay there. She abandoned it woefully, taking those who would come with her and entrusting the archangel Radiant as its caretaker in her absence.

Living with Feroz on Ulgrotha[edit] 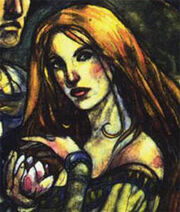 Serra in the Homelands

She wandered the planes for some time afterward, eventually meeting and falling in love with another planeswalker named Feroz.[5] They lived together on the plane of Ulgrotha for some time, protected from the rest of the multiverse by Feroz's Ban, and protecting the people of Ulgrotha from Baron Sengir and his vampires. That is until Feroz himself was accidentally killed before her eyes.

Serra, heartbroken, fled Ulgrotha to Sursi on Dominaria and hid among some wandering refugees (possibly from her own plane).[3] Serra joined Feroz in death soon after when she was surprised by a thief who was a disguised planeswalker. Though she could have healed herself easily, her will to live had been shattered and she wasted away. She used her last strength to sanctify the land around Sursi.[2][3] Her death inspired Brother Angus, the man who had saved her from the thief, to build the Cathedral of Serra around her tomb.

Radiant and the end of the Realm[edit]

After Serra's death, her legions persisted and were taken over by Radiant, who was prideful, quick to judgment, and lacked Serra's compassion, allowing her and many of her followers to become corrupted by the influence of Phyrexia. The sisterhood of angels fell completely under Phyrexian influence, with Radiant's corrupted angels becoming a terrible winged army, slaughtering the inhabitants of Serra's Realm.

Urza visited the Realm in its last days on the Skyship Weatherlight and saved many Serran refugees before collapsing the plane to prevent its total takeover by Phyrexia. 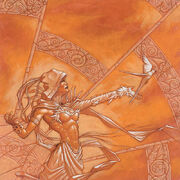