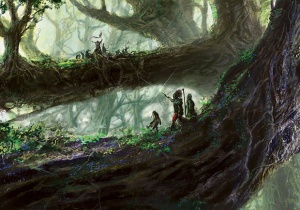 Tazeem is one of the seven continents of Zendikar. Here sunlight is obscured by large hedrons that float in the sky.

Tazeem is the native home to most of the plane's merfolk.

Rise of the Eldrazi[edit | edit source]

Within two years of the release of the Eldrazi, Sea Gate was overrun and destroyed.[3] Oran-Rief is dead now;[4] the Halimar basin is emptied.[5]