From MTG Wiki
(Redirected from Scion of the Ur-Dragon)
Jump to: navigation, search

Not to be confused with Ur-Drago.

The Ur-Dragon, Progenitor of Fire, is an enormous and immensely powerful Dragon Avatar. An entity from the dawn of time, it is the primordial essence of all Dragonkind in the Multiverse.[1][2][3] With its wings, that extend across the eternities, it stirs the fabric of the cosmos. Its breath bellows over the mortals, stealing the essence of life. With claws that rake the aether, it sunders ancient bonds. Thanks to its eyes, the Ur-Dragon perceives the deepest truths concealed in the wells of time. Its bellowing roar summons its brood, echoing through the blood of all dragonkind, for the Ur-Dragon is the progenitor from which the dragons of the Multiverse spawned.[4]

The Ur-Dragon is described as a huge, dark and terrifying shadow. It is a being that lives betwixt and between, in a place and in no place: it is apparently blind. In its travel through the planes, it creates storms with the beating of its wings: from such storms other dragons are born. Its "children" include the twin Elder Dragons Ugin and Nicol Bolas, as well as their siblings and cousins.[5]

Scion of the Ur-Dragon[edit | edit source] 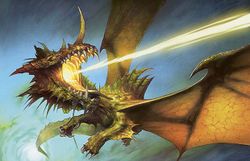 As said, the spirit of the Ur-Dragon flows through all dragons, granting them physical might, powerful magic and peerless intelligence. Among the dragons, the Scion of the Ur-Dragon feels this visceral bond more closely than most, and he believes himself to be the blood of its powerful ancestor.[6] However, he is not alone in his power. The Primeval Dragons of Dominaria, in fact, each bear one of the characteristics of the Ur-Dragon.[7]