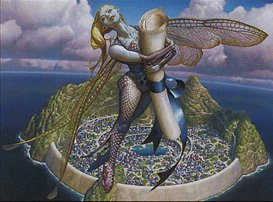 A cloud sprite over Saprazzo. Art by Mark Zug.

Saprazzo is a city of merfolk and humans on the plane of Mercadia, located within a lake in the center of a volcanic caldera, far out to sea from Rishada. Half of the city is underneath the caldera lake; the other is above the surface, where most air-breathers stay. The upper half is concentrated around the sides of the caldera shore. A marketplace lies at the top of the city near the wall of the caldera. Poorer citizens live in the upper areas, and richer people nearer to the water. Saprazzan governmental structures lay toward the bottom. There are waterfalls and decorations throughout the city. Living in Saprazzo is generally luxurious and the merfolk are light-hearted.

Merfolk are the leaders and main inhabitants of Saprazzo. They are dear friends with the Cho-Arrim, and retain a similar version of the Ramos myth, as well as a strong sense of religion. The leader of Saprazzo is the Grand Vizier, ruler over lesser viziers and judges, in an intricate system of leadership. Politics are a very serious matter in the city.