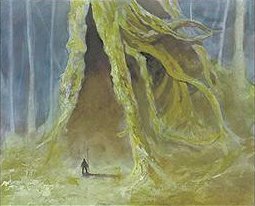 A large forest to the southwest of Mercadia City, Rushwood is itself a living entity. Beasts such as wumpus and horned trolls live in the woods. The Cho-Arrim, a spiritual and mystical people, live under the care and protection of the forest itself. The Mercadians are always on the lookout for the Cho-Arrim, rebels against the magistrate's rule. There ran a great river through Rushwood, which would shift as the forest willed for the people of the Cho-Arrim. It was believed that this river was the path to the afterlife, followed by recently departed souls.