From MTG Wiki
(Redirected from Rubblebelt)
Jump to: navigation, search

Ravnica (pronounced /RAV-nih-kuh/ IPA: /ˈɹæv.nɪ.kə/),[2] is a plane whose main planet is covered in a large city, eponymously known as Ravnica.[3][4] It takes its flavor from that of Eastern Europe. Ravnica is the setting of the Ravnica block, Return to Ravnica block and Guilds of Ravnica, Ravnica Allegiance, and War of the Spark expansions.

Ravnica is a worldwide cityscape; a ecumenopolis consisting of a patchwork of grand halls, decrepit slums, and ancient ruins, with layer upon layer of stonework.[5] Law magic and the metaphysics of hierarchy are deeply woven into the very fabric of the plane, enabling cooperating leaders to achieve feats of greatness.[6]

Of the world's countless civic centers, one looms large above all others: the City of Ravnica, a metropolis so vast that its name has long since become synonymous with the entire plane. Centuries of Ravnican business—powered in many cases by Izzet boilerworks and other guilds’ foundries—have saturated Ravnica's atmosphere with all manner of industrial pollution.[7] Prior to the events of Dissension, the city and plane of Ravnica had been ruled by the Ravnican guilds and governed by the Guildpact for more than ten millennia.

Ravnica has two moons.[8] While much of its surface is urbanized, subterranean oceans exist.

Ravnica and the Multiverse[edit | edit source]

As a plane, Ravnica was affected by the Rift Crisis on Nexus of the Multiverse, Dominaria. As a consequence, it became isolated from the rest of the Multiverse, in a seal similar to the Shard of the Twelve Worlds, but with Ravnica as the only plane.[9][10] On the surface of this 'micro-shard' appeared a blister, a piece of folded aether that trapped all Ravnican souls upon death, forcing them to become spirits and ghosts that manifested themselves on Ravnica's physical plane as the Ghost Quarter of Agyrem.[11] The separation might also have improved the lifespan of its inhabitants; for example, Agrus Kos was a normal human, who was over 120 years old, an age likely roughly equivalent to 65–70 years on Earth.

After the Mending the Ravnican ghost-world anomaly was dissolved, and the trapped spirits were able to pass on to the aether.[12][13]

A delicate and sophisticated race of elves known as the Erstwhile once were an important faction in Ravnica. They were laid to rest in coffins in Umerilek, Mausoleum of the Erstwhile.[14] They returned as Zombie Attendants of Vraska. Their leader is Storrev. 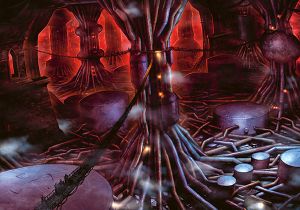 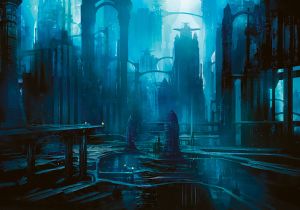 Ten thousand years before the events of Ravnica, the plane of Ravnica boasted untold violence and brutality, with various factions constantly waging war against one or more of the others. Realizing that this neverending war would ultimately destroy everything, a council between ten factions was held, where the leader Azor I suggested establishing a living, breathing enchantment that would end the violence and ensure the survival of the factions. While some of the order-phobic factions had initial disagreements, the other nine leaders eventually concurred that such a pact was the best chance of survival. Each of the ten factions signed the Guildpact, and over time, these factions became the ten guilds of Ravnica.

The power of the Guildpact was subtle; it prevented any guild from dabbling into the business of any other guild or disturbing the stable power balance among the ten by twisting circumstance and coincidence to nullify the disruptive guild's actions. While the Guildpact was credited with bringing relative peace and prosperity to the plane, sporadic clashes between guilds still occurred. Despite any conflicts between the guilds at a particular time though, the anniversary of the Guildpact's signing was celebrated every year with a day-long festival, where all the people laid down their weapons and made merry. This celebration was called The Festival of the Guildpact.

Not all of Ravnica's citizens are a member of a guild; about half of the population is guildless.[15] However, the guilds are a required part of daily life, and their presence is felt everywhere on Ravnica.

During the Decamillennial Celebration of 10,000 ZC, the Guildpact was broken. The ancient balance was shattered, and Ravnica was thrown in chaos.

Return of the guilds[edit | edit source]

The former guilds, however, were not long to rest, and they reestablished, many under new leadership. Some adopted a new purpose, as the original Guildpact had bound them to a specific task for over ten thousand years, and the guildless had grown weary of some of their morally questionable activities. Most guilds, however, follow the same basic structure they always had, as habit and traditions are forces at least as strong as the Guildpact.[16]

In 10,075 ZC, the Izzet guildmaster discovered that Azor I had created a contingency plan that would take effect if the magic of the Guildpact was ever broken. An intricate network of leylines sprawled across the districts Ravnica, called the Implicit Maze, offered a test to the guilds. If they would cooperate to solve the maze, they would secure the power of a new Guildpact. That power was eventually bestowed upon Jace Beleren, who became the Living Guildpact. Any law that he verbally confirms becomes legally binding.

As Jace is a planeswalker, his attention never remains focused on Ravnica for long. During his absences, the guilds return to their old habits of fighting with each other over the smallest scraps of influence or territory. Meanwhile an outside influence has taken control over several guilds, for reasons yet unknown. After Niv-Mizzet reveals his knowledge of the existence of other planes, planeswalkers, and the threat of Nicol Bolas, he has Ral Zarek turn Project Lightning Bug into a beacon to call other planeswalkers to help fight Bolas.[12][17]

Ral's efforts to convince the Ravnican guilds to cooperate with Niv-Mizzet's plan were met with resistance from every quarter.[18] Even bringing them together for a single meeting seemed next to impossible. Every guild had some members who supported cooperation and others who opposed it. At last, a guild summit was convened at New Prahv to discuss the growing tensions between the guilds. Isperia proposed a radical idea: cooperation.[19] After a contentious discussion, Niv-Mizzet arrived to reveal the real threat they were facing.[12] The Firemind then proposed to implement the "fail-safe" and grant him the power of the Living Guildpact. Although Niv offered to leave the Izzet League and become a guardian of Ravnica, many distrusted his motives. With that, the summit was adjourned until the following morning.

That night, Vraska met Isperia alone in the conference chamber. Simultaneously fulfilling Bolas's demands and achieving personal revenge, Vraska petrified the sphinx.[20] In the morning, the guildleaders reconvened, only to find Isperia turned to stone. All hopes for cooperation now seemed shattered.

Not long after, Ral Zarek activated the Interplanar Beacon and at the same time Nicol Bolas arrived on the plane.[12]

As the precarious accord among the guilds teetered on the brink of collapse, Domri Rade led the Gruul in a concerted effort to tip the world into chaos.[12] He amassed an enormous mob to rampage through the city streets, making sure that every guild suffered painful losses to keep them at each other's throats. Some among the Gruul, especially among the Zhur-Taa clan, thought this to be the End-Raze.

The fight between Nicol Bolas and the Gatewatch turns into an all-out planeswalker war. Dozens of powerful planeswalkers, from many disparate realities, unite against the elder dragon, who has claimed dominion over Ravnica and is perilously close to completing the spell that will grant him godhood. As they fight alongside the Gatewatch—led by Chandra Nalaar, Jace Beleren, and Gideon Jura—against Bolas and his relentless army of Eternals, nothing less than the fate of the multiverse is at stake.[21] Little do the Gatewatch suspect that Bolas has not only accounted for their interference, but he is practically relying on it.[12] Bolas arrives and attacks the cityplane, leading to the death of Niv-Mizzet, as well as creating a citadel and a statue of himself. As a reaction, Ral Zarek activates the Interplanar Beacon to call other planeswalkers to Ravnica. Dovin Baan later activates the Immortal Sun to trap the planeswalkers as Bolas unleashes his army of Eternals to conquer the plane and harvest the planeswalkers' sparks. Heavy damage is done to the city, including the destruction of the Vitu-Ghazi and the Chamber of the Guildpact, with much loss of life, both from citizens and planeswalkers. In the end, Bolas was defeated and a resurrected Niv-Mizzet became the new Living Guildpact.

The original City of Ravnica was made up of 10 districts, named in simple numerical order. No correlation exists between the ten guilds and the ten districts, all guilds are active in every district. The Tenth District, in particular, is a hotbed of activity where all the guilds maintain their primary headquarters. Beyond the core are countless other districts that originated as outlying cities that eventually melded into the expanding metropolis.[15] Examples are Irbitov and Jezeru.

The ten districts are arranged radially around the center of Ravnica.[22]

The Tenth is the hub of most important activity on Ravnica, and this is reflected in grander architecture, busier markets, and wilder traffic in the streets.[23] To be governed effectively, the Tenth District is broken into six precincts, each the size of a small city.[15] Precinct One (also known as the Guildpact Precinct) is the hub of the wealthy and powerful and Precinct Two is populated by businesses. In Precinct Three (the Greenbelt), nature has encroached on the urban environment, while the scarred streets of Precinct Four are a proving ground for soldiers and marauders alike. Precinct Five is characterized by its many schools, libraries and laboratories, and Precinct Six is the workers district with warehouses, docks and factories.

Anchored by enormous chains at the juncture of Precincts One, Three and Four, the Millennial Platform is a floating observation deck that affords the best overhead view of the District. It houses an exclusive restaurant.

There are also several plazas:

In the Greenbelt (the Third Precinct):

The Smelting Quarter is the center of Ravnica's industry. It is also home to numerous unguilded.

The Red Wastes are located directly north of Precinct Four

Irbitov (the mausoleum district), is an Orzhov-controlled quarter populated with mausoleums, memorial statues, and underground vaults.

Jezeru (the Lake District) is an entire district covered in shallow water. It is an attempt to bring the Simic above ground.

Rivers, lakes and oceans run deep below the surface of Ravnica, Several of the connect to the Simic zonots. They are used as thouroughfares by aquatic races and monsters. This area has traditionally been home to Ravnica's merfolk and to a variety of marine life, but has recently become home to escaped krasis that have had an adverse effect on the native ecosystem.[46]

Other locations outside the Ten Districts[edit | edit source]

Ravnica's currency is referred to as zibs and zinos, with 100 zibs making up 1 zino. 10 zibs will buy you a cup of coffee.[15] A demonination called "zidos" has also been referenced. [49]