From MTG Wiki
(Redirected from Rootwater)
Jump to: navigation, search

Skyshroud Forest was a dense jungle on Rath that was transferred to Dominaria.

The Elves of Skyshroud were once very peacable beings, intent on living only the simplest and most placid of lives upon a floating construct in one of Dominaria's expansive oceans. The elves coexisted with a group of merfolk, and the two races existed as one nation for many years, sharing their skills and resources to improve their mutual lot. The portal that dragged them to Rath snatched a massive body of water along with it. 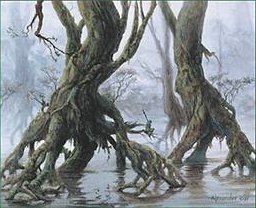 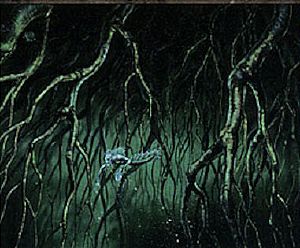 The transition between worlds was almost immediate, and it took the elves a few days before they began to suspect that the weird storm above them was far more than a localized magical battle. Though large, the body of water was not sufficient for the needs of both the merfolk and the elves. Their alliance drifted apart as the food dwindled, and their partnership ended abruptly in a bloody battle. The elves realized they were at a disadvantage to the merfolk, and so decided to build a new home via magical means. In a matter of months a new forest had grown, which was called Skyshroud.

At its base, the roots of the trees tangled into an almost solid floor of plant life, and this strange edifice floated upon the water. Over the centuries, the merfolk became savage carnivores (with the help of some judicious genetic alteration by the evincars) and the forest grew to enormous proportions. The roots created a labyrinth beneath the water, choking the home of the merfolk. The merfolk cursed the elves and their new home, named Rootwater. Above, the forest canopy had thickened so that barely any light reached the depths of the forest. This suited the elves, who didn't wanted to be reminded of the horrors beneath.

During its time on Rath, the extremely dense jungle was also inhabited by a number of rebellious human tribesmen and druids, most likely of Vec descent, that were allied with the elves against the Stronghold as the forest's thick canopy offered protection against the skyship Predator. It was also home to various creatures such as trolls, wild vampires, and other predators.

Skyshroud appeared on the frozen wastes of Keld following the Rathi Overlay. When the overlay took place, the jungle began to freeze due to the heat difference between the climates, but it was saved by the planeswalker Freyalise, who cast a spell to keep the forest warm. Following the Invasion, she had relocated permanently to this place. The merfolk may have died off after the overlay.

Skyshroud served as a haven from the ravages of post-Apocalypse Keld thanks to its guardian's magic. Following the resurrection of the slivers on Otaria and their subsequent spread throughout Dominaria, the forest was evidently overrun by the creatures, which Freyalise hoped to use as a source of additional mana. With Karona's life and death, the rift in the fabric of space and time, which had been opened around Skyshroud in the wake of the Rathi Overlay and Freyalise's interference, turned into a mana-consuming time-rift weaking Keld's environment. It also linked Keld to its alternate-reality older version, still dominated by Gathans. Soon, these time-displaced warriors attacked the true Keldons and Skyshroud's inhabitants.

After Freyalise sacrificed herself to close the rift, the mana sustaining the forest weakened, and its inhabitants had to move to another location. The current status of the Skyshroud is unknown.