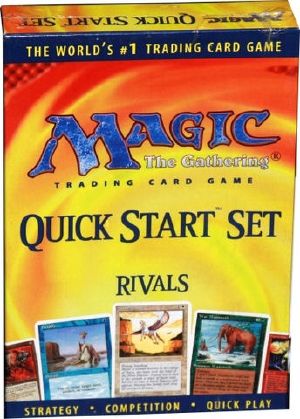 The Rivals Quick Start Set was released in the United States in June 1996.[1] It was the first box set in the history of Magic.

The Rivals Quick Start Set aimed to better explain the rules of Magic than any standard rule book could do. It featured four small preconstructed theme decks and extensive game guides. The four decks could later be combined in two larger decks. The set was printed in the United States by Shepard Poorman. This 2-Player Starter Set was supposed to be the first of a series of three Quick Start Sets. The next box, called Conquest Quick Start Set, was already announced, but the production was cancelled shortly afterwards.

A similar box set called the Introductory Two-Player Set was released later that year for the European and Japanese markets.